On Friday, Keefe Kaplan Maritime, Inc., or KKMI, will face off against the California Sportfishing Protection Alliance (CSPA) in federal court at a settlement hearing to resolve allegations made by CSPA that KKMI is violating the federal Clean Water Act and its discharge permit with the San Francisco Regional Water Control Board. This settlement conference follows nine months of fruitless negotiations to resolve the conflict. In its lawsuit, CSPA alleges that KKMI’s discharge of pollutants threatens or impairs the ability of its members to ” . . . fish, sail, boat, kayak, swim, bird watch and engage in scientific study . . .” in the Santa Fe Channel, where KKMI is located. In addition, CSPA alleges that KKMI is discharging more copper into the water than is allowable under California Toxics Rule guidelines, which they say is a violation of the terms of its discharge permit.

Neither of these claims withstands serious scrutiny, but the costs incurred by KKMI in defending itself will ultimately be borne by the boating public, adding to the costs of boat ownership in the Bay Area and beyond. By raising the costs of ownership, the CSPA lawsuit may very well prove to be counterproductive, undermining sportfishing, environmental stewardship, and water quality in and around the Bay Area. Furthermore, by filing such a lawsuit, CSPA may itself be violating the terms of its own nonprofit charter, which requires that it operate for the public good.

The first allegation, that KKMI impairs the use of the Santa Fe Channel, is nonsense. There is a kayak launch ramp open to the public immediately adjacent to KKMI, and nothing that KKMI does impairs the use of that ramp. For many years, we had a friend who lived aboard his boat in the Santa Fe Channel, and we sailed there many times to visit. The channel is, however, a deepwater port, and we have often had to wait for tugboats and large ships to clear the channel before being able to proceed.

The second allegation is more complicated, but KKMI has been notably forthright in documenting their discharges and submitting their data to the Regional Board. Hence, the governmental unit tasked with overseeing the discharge permit is fully aware of KKMI’s activities, and does not believe that KKMI is violating the law.

The Clean Water Act is a complicated piece of legislation, and complying with its requirements can be extremely challenging. However, KKMI has demonstrated a strong commitment to meeting the requirements of the law, and in many cases, sets the standard for environmental stewardship among boatyards in the Bay Area and across California.

Efforts to contact CSPA to better understand what they are trying to accomplish with their lawsuit were unsuccessful, but it’s our opinion that their actions have nothing to do with protecting either sportfishing or water quality. By raising the costs of boat ownership, they run the risk of undermining both of these professed goals.

Many of the resource management programs supported by the California Department of Fish and Wildlife are supported by fishing and big game licenses. If the cost of boat ownership becomes too prohibitive, the people who buy fishing licenses will stop buying, and the revenues used to manage fishery resources will be reduced. This will have a detrimental impact on fisheries and sportfishing.

Likewise, due to the increased costs of yard services at a yard that is continually striving to improve the environmental quality of its operations, boat owners may forego boatyard services altogether — or worse, give up sailing because it’s become too expensive. This would be unfortunate for many reasons, not least because well-maintained boats are invariably cleaner than boats that are poorly maintained. This will have a detrimental impact on water quality, and on the quality of the experience we sailors and boaters have when we are out on the water.

Ahead of the settlement hearing on Friday, February 15, we urge our readership to support KKMI in this matter. As sailors and stewards of our environment, let us hope that the parties reach an agreement.

This editorial has been updated.

Valentine’s Day is around the corner, and an article in my local sail’g rag, Latitude 38, brought a tear to my eye: the Forty Year Club. So far, I’ve got about 29 years of marriage under my belt, and always had a sailboat or two for about a dozen years before that. My wife recently said, “You’ve cheated on me!” Knowing that wasn’t the case, I asked if she could run down some of the highlights to jog my memory.

“Guilty as charged, your honor.”

When your hand’s been in the cookie jar for so long, it’s pretty hard to deny the charges.

Knot a Clew became my mistress only 20 years ago. With seven knee-replacement surgeries in the last three years, I hadn’t been able to even do a Newport to Ensenada  Race in five years. So we decided to let someone else race her. Feeling like the guys at the bar in the song Dixie Chicken, I hope she pops into his dreams like my time with her does. 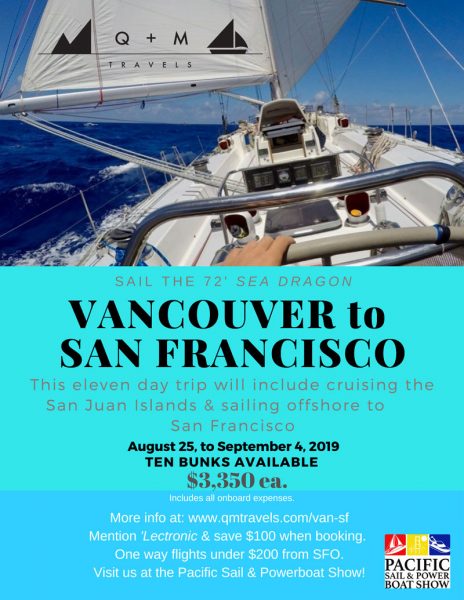 The Coast Guard received a mayday call on Sunday afternoon from the boat Divided Soul — the catamaran’s EPIRB was also triggered. The boat was 10 miles west of Torrey Pines.

Two adults and one child were pulled from the water. “Salvage of the Divided Soul is being coordinated by the owner,” the Coast Guard said. It is not clear what caused the catamaran to capsize.

The Robert Ward is headed to the Bay Area next month for its commissioning ceremony.

Late today, high winds and rough seas are forecast to hit the Bay Area and beyond. This might sound like a bit of a broken record — we’ve been getting all sorts of weather for months now.

But always being ready, the Coast Guard is advising the public “to stay off the water and avoid hazardous conditions near beaches, jetties and rivers as the storm is forecasted to cause gale-force winds with gusts up to 60 mph and breaking surf up to six feet.”

Please be careful out there, everyone.

With a rhumbline distance of 3,570 miles, the Tahiti Transpac’s Los Angeles-to-Papeete course is more than half again the distance from L.A. to Honolulu, sailed biennially in the better-known Hawaii Transpac (2,240 miles). But that’s far from being the only factor that sets these two classic ocean races apart.

As announced at a media event on Friday at Los Angeles Yacht Club, plans are being firmed up for a new edition of the Tahiti Transpac, with the first start slated for May 28, 2020. As in years past, the course will run from San Pedro’s Point Fermin to Point Venus, on the outskirts of Papeete, Tahiti — so-named by Captain Cook in 1768.

In addition to the race’s eye-popping distance, the navigational challenges presented by sailing from the Northern to the Southern Hemisphere are substantial — with the vagaries of the equatorial doldrums thrown in as the ultimate weather wild card. Renowned offshore navigator John Jourdane explains:

“After the start, and rounding West End, you put up the spinnaker, and run for several days southwest past Mexico. Then the easterly trades build and you beam-reach in a lot of wind for a few days. Next, you have to find the narrowest area of the ITCZ (doldrums), where there will be little or no wind and lots of rain squalls.

“Once you cross the equator, the southeast trades will fill in and it can be a very windy, rough beam reach or close reach to the finish in Papeete. It’s a much longer race, and can be rougher, but it is well worth the adventure.”

The current record of 11 days, 10 hours, set in 2008 by Doug Baker’s Magnitude 80, seems impressive. But many veteran ocean racers in attendance at Friday’s announcement seemed to think that some of today’s ocean-racing thoroughbreds can beat Mag 80’s 13-knot average speed. For the first time, a multihull division will be offered, whose entrants will vie for a separate record and trophy.

Friday’s announcement signals a joint effort between the Transpac YC and the Tahitian event promotion firm Archipelagos. For more on the 2020 Transpac Tahiti Race, see www.transpac-tahiti.com. The official Notice of Race will be posted there soon.