Former Latitude 38 editor LaDonna Bubak just alerted us to a Cruisers Forum note that cruiser Bob Smith, of the home-built 44-ft catamaran Pantera, hasn’t been heard from in three months. His daughter, Natalie, has become concerned. Natalie reports that Bob has been living aboard in Mexico for the past 10 years. He typically remains in touch on a regular basis. Brad of the SV Perspective reports seeing him on October 19 on the Bay of Los Angeles in the Sea of Cortez with all well.

Pantera is an active, well-known cruising cat along the Mexican coast, and a vet of the 2006 Baja Ha-Ha. We just want to help put Natalie’s concerns to rest. Anyone who has information can email us here.

An educational nonprofit in Redwood City is the latest organization to be locked in an inexplicable struggle with the Bay Conservation and Development Commission’s permitting process.

The Marine Science Institute (MSI), which offers hands-on science education to over 50,000 Bay Area youth every year, has been trying to get a permit to restore a small, eroding beach for more than five years. MSI has obtained its permits from six agencies — three federal, two state and one city — but still hasn’t been approved by the BCDC to replace oyster shells on their 150-foot swath of shoreline.

“Everyone else has given us the go-ahead,” Marilou Seiff, the executive director of MSI, told Latitude. “But BCDC has put their heels in. Originally they asked us for studies, including an engineering study looking at how long the oyster shells will last.” Seiff said that the study would have amounted to $20,000 for a roughly $50,000 project, and added that a new beach, from which to launch canoes, is urgently needed. “The beach is eroding and becoming a safety issue. Little kids can’t even launch the boats any more.”

MSI originally didn’t have the funds to do the study, but received a grant from the Cosco Busan oil spill settlement. Seiff said that after contacting a private engineer, she was told that there was no way any expert could ultimately “guesstimate” how long the beach would last. But it was recommended that MSI pitch a pilot program to the BCDC, so that the erosion of the beach would be observed over time.

“[The BCDC] sent us some examples of other monitoring programs. We took parts that were pertinent to our project,” Seiff said. “It was all done in-house and not with an engineer; but BCDC is coming back and saying no, they want it done through an engineer. But the Cosco Busan funds were going to be cut off by December 31. We were going to lose $50,000. We are working with the trustees of the Cosco Busan grants to get it extended, but have not heard from them yet.”

At the December 6 BCDC hearing that green-lighted a settlement with Westpoint Harbor, members from MSI testified to the committee, asking for approval of the permit. Afterward, Bob Wilson, a member of the San Francisco Bay Stewardship Alliance “again asked the executive director of the BCDC to help the kids and issue that permit. He refused, saying they needed more reports. Nonsense!” Wilson told us in an email.

MSI’s impact on local youth cannot be overstated. “Their renowned programs led by expert marine-science educators have benefited hundreds of thousands of students of all ages over the decades, inspiring understanding, respect and stewardship for the unique marine environment that is the San Francisco Bay estuary,” Wilson wrote in a November 12 letter to BCDC executive director Larry Goldzband.

“You and your staff should be embracing MSI and their fine program and expediting this work,” Wilson continued in his letter. “BCDC stands alone in its refusal to grant approval. The Alliance notes that six local, state and federal organizations have already approved this restoration, including: US Army Corps of Engineers, US Fish & Wildlife Service, California State Lands, California Regional Water Quality Control Board, NOAA Fisheries and Redwood City.”

MSI ultimately hopes to broaden its operations by purchasing land to facilitate more science education and community events and access.

But first, they need their beach.

“It has taken five years to put in 300 cubic yards of oyster shells that were dredged from here in the Bay,” Seiff said. “It’s not anything we’re getting any financial gain from; it’s just increasing access.”

The BCDC did not respond to our requests for comment on this story.

CORRECTION: We originally said that the BCDC had intervened to help extend the Cosco Busan grant. This was not accurate. MSI has been working to extend their grant past December 31, but the fate of that money is still uncertain. 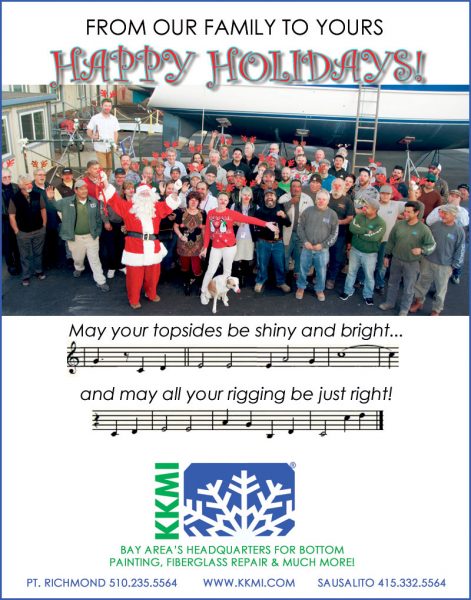 Long before Merlin and Imp, Blondie and Condor — and Charley, The Wizard, Morning Cloud, Santa Cruz 27s/50s/70s, Regardless, Fast Is Fun, Mirabella V, the Chicken Coop, half the Swan lineup in the ’80s and ’90s and, well, everything else — Ron Holland and Bill Lee were just two young guys having fun and hoping to make a career in the marine industry.

The two met in 1969. Holland, then just 22, had been sent from his native New Zealand to the Bay Area to oversee a project for George Kiskaddon. He was meeting and sailing with guys like Commodore Tompkins, Doug Peterson, Gary Mull and others — and everybody kept telling him he had to go to Santa Cruz to meet “an off-the-wall young designer and boatbuilder named Bill Lee.”

So one day, off he went, making sure to bring the obligatory six-pack of beer — the price of admission, according to a sign on Lee’s door.

The boat was Lee’s latest creation, Magic, which was essentially a 5O5 on steroids — 30 feet long, 2,500 pounds and carrying almost as much sail area as a new Ericson 35.

In his new book, All the Oceans: Designing by the Seat of My Pants, Holland describes what happened next.

“There wasn’t much wind, but we spent a pleasant couple of hours on the bay discussing yacht design. Then, with the tide falling, it was time to return to the harbor.

“‘This should be fun,'” said Bill as we approached the sandbar at the entrance. With surfers all around us riding breaking waves, he fearlessly steered Magic onto the bar. Crash! We hit the bottom. ‘Godammit!’ said Bill. ‘I though there was enough water under the keel.'”

But instead of stopping dead, Magic popped straight back up and floated across the bar all by herself into calmer waters. “‘The keel’s come off,’ announced Bill. He didn’t seem too worried, but I certainly was. ‘We’re sinking,’ I said. ‘Fast!’

“Bill dove below, fired up the engine — the water was coming in so fast there was no possibility of bailing her out — and we headed for the nearest dock as fast as we could. As soon as we got there, we lashed her securely to the mooring bollards just in time — Magic was already half full of water — and stepped ashore. Bill seemed unperturbed by the incident. The next day, he dispatched a team to wade out to the bar at low tide and skid the keel back to shore.”

Look for more on Ron Holland and All the Oceans in the January issue.

The old Volvo has been junked and is on its way to the wreckers. That is, the old format for the Volvo Ocean Race is history, along with its title sponsor and the Volvo Ocean boats.

Faced with dwindling entries and viewers, The Ocean Race has adopted the singlehanded-class IMOCA 60 as a replacement for the Farr-design VO65 crewed boat used in the last two editions. Although set up for singlehanded racing, the new IMOCA rules make it possible to transform the boat to a crewed version easily with only marginal changes.

“A lot of detailed work was done by the IMOCA technical committee,” explained IMOCA class president Antoine Mermod at a meeting last week in Paris. “All of the boats must fit in with the rules of the class. The limits to the rules may not have been that clear, so we had to make them more precise. That is all the more important as in 2019 there will be at least six new boats designed by four different architects. The measurers now have a solid tool to ensure an even playing field. We have planned an extension to these rules for crewed sailing, as we look ahead to the round-the-world race scheduled for 2021-22.”

The old but not-quite-dead-yet VO65s will also be incorporated into the new Ocean Race format. The plan is to use the boats in a one-design youth class to be run on the same course as the IMOCAs in 2021-22. The course is still to be determined, but obviously it must go around the world. The current plan is eight stages with a prologue in Marseille, France, before the official start from Alicante, Spain. Ocean Race director Phil Lawrence adds: “We are trying to design the course with a lot of downwind sailing, even more than in the traditional course. Asia is important to the sponsors, so Asia will be in, I think. We are modeling some scenarios with some longer Southern Ocean legs for the downwind element. But it is like putting together a jigsaw puzzle.”

One of the cool features of the last edition of the Volvo Ocean Race was the commitment to promote women on the crews. They promise to continue with that in the next version of The Ocean Race. Hopefully the excellent media coverage and great onboard video will also continue. With the next Vendée Globe heading off around the world in 2020 and The Ocean Race quickly following in 2021, things should be exciting for us couch sailors living the extreme vicariously.

You can still find The Ocean Race online at www.volvooceanrace.com.

SHARE ON Tweet Share Email Linkedln
Leave a comment
Receive emails when 'Lectronic Latitude is updated. SUBSCRIBE
'Lectronic Latitude: Friday, Dec 14
Formerly News Nuggets
‘Golden Rule’, ‘Balclutha’, Mavericks
"S/V Golden Rule, a project of Veterans For Peace, needs a captain/skipper who can prepare the boat and crew, then skipper the gaffe-rigged ketch to and around Hawaii in spring 2019," read a press release from Jan Passion, who's been involved with the storied Golden Rule for a number of years.
America's Cup News
SoCal America’s Cup Team
They're in! On Wednesday, we floated the well-founded rumor that Taylor Canfield would head up a Long Beach Yacht Club-flagged America's Cup team. Now it's official.
Sponsored Post
Ad: Catamaran Cruising with Modern Sailing
Citizen Science
The Return of the King Tides
Sailors and the general public can participate in the California King Tides Project. The project asks Californians to observe the ultra-high tides and share their photographs.
Magazine Deadline
Classy Classifieds Deadline Tomorrow
The deadline to advertise in January's Classy Classifieds is Saturday, December 15.
More 'Lectronics »
Report Listing