Although there were 16 separate racing events in our 2018 calendar for this past weekend, we decided to go ‘cruising’ instead. We weren’t alone. The Bay was covered with both racers and cruisers enjoying the last of warm-weather sailing. The weather’s been so beautiful these past few weeks that we’re beginning to wonder if the California winter will ever arrive. We’re in no rush.

With a strong ebb on Sunday afternoon, we avoided the Central Bay, as we didn’t want to spend too much time fighting our way home, and just headed for a loop of Angel Island. The breeze was moderate, but we saw a good number of boats reefed anyway, leading us to believe relaxation was a primary motivator for being out for a Sunday afternoon sail. We grabbed a few shots of some boats out for the day, all lookin’ good.

Much farther south, the Baja Ha-Ha fleet was continuing their pleasant sail, with most boats pulling into Bahia Santa Maria from Turtle Bay today.

Fall cruising season doesn’t only happen in Mexico. Daylight is shorter but the winds are often more comfortable, so it’s a great time to take out friends and family who might have otherwise been terrified sailing with you in July!

And about all that Bay Area racing this weekend? We will cover some of the highlights in Racing Sheet in the December issue of Latitude 38.

Just as we were finishing up this morning’s ‘Lectronic Latitude, we received a “Stop Presses” email from the Golden Globe solo around-the-world race. Jean-Luc Van Den Heede (aka VDH) was leading his seven remaining competitors by more than 2,000 miles when he suffered a knockdown today aboard Matmut. The Rustler 36’s mast suffered damage to the bolt attachment that holds all four lower shrouds. The mast is not in danger of falling. The 73-year-old Frenchman reports 65-knot winds and 36-ft seas, and is now running downwind without sails until he gets out of the storm. His plan is to make for Valparaiso, Chile, where he will repair the boat. He does not want assistance and is confident that he will make Valparaiso safely. But his stopover will move him to the Chichester Class.

VDH’s misfortune will shift the Golden Globe lead to Dutchman Mark Slats, who is also sailing a Rustler 36. Slats has 11,006 miles to go to the finish in Les Sables d’Olonne, France.

The middle-of-the-pack competitors have been sailing through a storm of their own. American/Hungarian skipper Istvan Kopar, sailing the Tradewind 35 Puffin, gave an account of his attempt to reach the mandatory film-drop and checkpoint off Hobart, Tasmania: “I am not happy in my ship, I can tell you!” Kopar sought shelter off South Port Beach before continuing on around Tasmania’s South East Cape. Trying to make landfall during the height of the storm and find a safe anchorage at night was  brutal. “The last four days have taken me to the bottom. I would have been much happier to have been offshore.” He arrived at the Hobart stop without a radio, direction finder or accurate idea of time. “You really don’t know where you are, and it was blowing a minimum of 50 knots. Right now, I’m more attracted to gardening than offshore sailing.”

For more and to follow this grueling 1960s-style adventure, see www.goldengloberace.com. 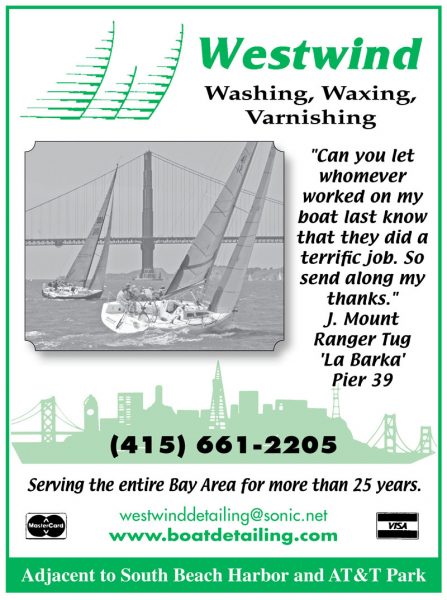 There’s a new club coming to the Bay Area’s newest piece of waterfront, and it will have yachts. But don’t call it a yacht club.

The Club at Westpoint was formed in January, and as of the summer, already had nearly 100 members signed up. Currently housed on the top floor of the Westpoint Harbor harbor house in Redwood City, the Club at Westpoint hopes to break ground soon on a “high-tech, modern, super-cool, classy, sophisticated, elegant 15,000 square-foot two-level building,” according to Kevin Parker, one of the people behind the Club at Westpoint. Parker says the club hopes to have a soft opening at Thanksgiving, with the full opening in December 2019.

“We deliberately chose not to use the words ‘yacht club,'” Parker added. “There is a certain impression that people get from ‘yacht clubs’ that can be intimidating and excluding. We want to be an inclusive club that anyone can join. The idea of the Club at Westpoint is that we’re a premier sporting and social club where people can come and enjoy the water and the weather. Our motto is ‘no boat, no problem’. We want to make it as open as possible.”

Parker said that the two-floor Club at Westpoint will have a casual downstairs bar and restaurant, “serving good, wholesome food in the style of a British pub.” The downstairs will also feature a conference center, which will double as an event space and be available to rent out. The bottom floor will open onto a one-acre green area, where there will be indoor and outdoor seating. Redwood City is, of course, known for his exceptional microclimate, which tends to be a few degrees warmer than the surrounding towns during the summer months.

Parker said the upstairs will have a fine-dining restaurant on a private deck overlooking Westpoint Harbor. The club plans to source local food and beer. Parker went on to say that the Club at Westpoint plans to be environmentally conscious and sustainable, “We’re going to build ways of filtering rainwater and using other organic methods in our operation. We’re also going to offer a residence program for ornithologists or biologists, where they can use the club house as a venue for marine sciences, to help us all become better stewards.”

Originally from the UK, Parker went to work at Pacific Shores Center, a high-tech business park adjacent to Westpoint Harbor. He decided to look for “lower-cost living,” bought a boat, and kept it at Westpoint. “That gave me the ability to be on the water three days a week, and to be part of an amazing community.”

For more information, please go to The Club at Westpoint.

SHARE ON Tweet Share Email
Leave a comment
Receive emails when 'Lectronic Latitude is updated. SUBSCRIBE
'Lectronic Latitude: Friday, Nov 2
Latitude 38
New Latitude Still on Newsprint
Mark from Rubicon Yachts said a customer came in and told him that the October issue was the last month for the printed edition of Latitude 38, and that Latitude was going entirely online.
Singlehanded Transatlantic race
The Route du Rhum Spectacle
Perhaps the biggest race most Americans have never heard of is about to get underway in France.
Ad: Movie Night at Spaulding: Captain Blood
Coast Guard Rescue Website Stuff and Records
News Nuggets
Here are some news nuggets for your Friday: Coast Guard Comes to Aid of Diabetic Sailor off Eureka On Wednesday, the Coast Guard came to the assistance of a sailor onboard a 29-ft sailboat off Patrick’s Point, near Trinidad, California, just north of Eureka.
Nautical Trivia
Great Pumpkin Trivia Quiz Solution
On Monday we challenged you to test your nautical knowledge by playing along with Richmond Yacht Club’s Great Pumpkin Regatta trivia quiz.
More 'Lectronics »