On December 29, sailboats lit up the historic Aquatic Park anchorage with colorful holiday lights for the “Lighted Night in the Cove” to support The San Francisco Maritime National Park Association. It was a beautiful evening with perfect Bay weather conditions as the colored lights sparkled against the spectacular lighted backdrop of Ghirardelli Square and San Francisco. There were five sailboats in attendance — not as many as we hoped for, but considering the time of year, it was a good turnout. Everyone had a great time as Karen and Tim Crowe hosted the evening’s potluck aboard their Catalina 44.5 Crow’s Nest. 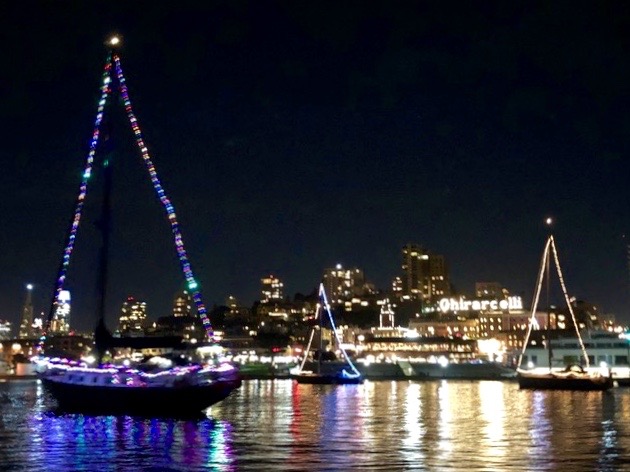 The idea behind holding the event was to reintroduce the Aquatic Park anchorage to the boating community in a fun and festive way. Surprisingly, many sailors aren’t aware that they can motor their sailboats into the park and anchor there. According to David Pelfrey, Aquatic Park harbormaster, the cove has the anchoring capacity of 4,380 sailboats per year, yet fewer than 300 boats anchored there last year. Part of the reason for this is misleading signage at the entrance saying “No motorboats” when they are referring to “powerboats.” Sailboats with auxiliary engines and/or dinghies with small outboards are allowed. Another common belief is that only small sailboats are allowed in, when in reality, sailboats are not limited in size. The park requests that any craft over 40-ft in length and/or with a draft of 8-ft or more contact the harbormaster for best anchoring instructions.

In San Francisco Bay, the number of anchorages is limited and needs to be preserved. The Aquatic Park anchorage in particular — with its incredible location — is quite a jewel. According to Pelfrey, the National Park Service wants the boating community to take advantage of what the park has to offer and wants to expand services for the boaters, including a dinghy dock/showers/restrooms. But, they can’t justify such an investment with such low boater attendance and zero boater input. Boaters are an important element of the customer base and part of what Aquatic Park was designed for. However, there are many different constituencies using the park, so without boater input, only non-boaters are making decisions about the direction of Aquatic Park.

According to Pelfrey, “In order for change to occur, we need the boaters.”

Thoughts? Please respond below, or send your comments here, and as always, please be sure to include your Boat Name, Make and Port of Call.

Receive emails when 'Lectronic Latitude is updated. SUBSCRIBE
'Lectronic Latitude: Monday, Jan 7
Wild Weekend
Richardson Bay Through the Storms
It was an absolutely wild weekend of weather here in the Bay Area that saw the cancellation of every major regatta — a rare occurrence for sailors used to 25-knot days in the summer.
New Boat on S.F. Bay
The Launching of Treebeard
Spaulding Marine Center hosted the christening of a seven-plus-year building project by J. Parsons, who designed and built the classic in his garage at home in Tiburon. (One of the first steps was building the garage!) The boat is the culmination of vision and hard work.
Sponsored Post
Ad: Westwind Boat Detailing
Race to Hawaii
Excitement Builds for 50th Transpac
“The 50th running of the race is a great milestone, and we have an incredible turnout," said John Sangmeister. In addition to the 92 amazing teams listed on the race website, Sangmeister claims to have loose verbal commitments from several others that would push the fleet past the century mark.
More 'Lectronics »
Report Listing