It only happens in the winter, and that’s part of the fun. Setting a spinnaker to head toward the Golden Gate is an unusual experience for many San Francisco Bay racers, but it was all part of a pretty idyllic first weekend of the Corinthian Yacht Club Midwinters. Despite heavy competition from the football playoffs, 93 boats signed up to sail. All were rewarded with a much better alternative to the couch-potato lifestyle. The breeze blew a reasonably steady 8-12 from the northeast, with a significant but fading ebb on both afternoons. Both Saturday and Sunday featured downwind starts, putting a premium on not being over early with a spinnaker half hoisted. Most seemed to get away cleanly.

On a ‘normal’ summer weekend an ebb means a big, wet chop, but not necessarily for midwinters. The ebb and northeasterly combo meant flat-water, dry-deck sailing for both afternoons. These ideal conditions also meant the starts got off on time. Even those who don’t care about football got around the course and were tied up and at the bar in time to see the Niners score on their first drive down the field. The final races in the Corinthian Midwinters will be held on Presidents’ Day weekend, February 15-16.

You can see the standings to date here.

It’s been a while since we’ve checked in with our friend Ben Shaw, host of the Out The Gate Sailing podcast. Just last night, Shaw posted an episode featuring one of our favorite themes: young people with old boats. Ben interviewed Lauren Moody, a former Navy sailor who is grappling with the agony and ecstasy of refurbishing an old boat. “After moving to the San Francisco area a decade ago, [Moody] built a community of sailing friends at the Travis Marina,” Ben wrote on his website. “It was there she first laid eyes on Intrepid, a Bob Perry designed Islander Freeport 36. It was in bad shape, nearly sinking at the dock. But it took some time for her to convince the owner to sell. Now she’s putting much time and effort into bringing the boat back to Bristol condition, doing all the work herself and learning much along the way.”

A few weeks ago, Shaw posted episode 33 with Jim Hancock, the founder and president of the nascent and highly anticipated (and much covered by Latitude 38) San Francisco Sailing Science Center. Ben took a deep dive with Hancock, who is a longtime Bay Area sailor and sailing instructor. Hancock holds a master’s in naval architecture and marine engineering from the Massachusetts Institute of Technology, or MIT. “The reason I went to MIT is I had started sailing as a teenager, and I knew that’s what I wanted to do,” Hancock said in the episode. “I wanted to work on the water and work around boats. That’s what I loved, and something I loved as a hobby or sports activity at a young age directed my career.”

When he was a young man, Hancock’s family owned a ski boat on Lake Tahoe, and went to a local shop to buy parts. In the store, there was video of a Hobie Cat sailing. “My dad said, ‘We need one of those,’ and we went home with a Hobie Cat.” Hancock said it was a few years before he really started sailing the boat out of Redwood City “and learning on our own by making a lot of mistakes.”

Hancock eventually went cruising for several years onboard his Freya 39 before returning to the Bay, where he began teaching sailing for Club Nautique. “But I always felt there was an opportunity for a better classroom — with models and wind tunnels and wave tanks.” Hancock imagined a high-end, two-boat racing school that would also teach the physics and science of sailing. The concept was partially absorbed by Hancock’s friend Travis Lund, the executive director at the Treasure Island Sailing Center. Hancock said TISC had the “scale” in terms of the boating infrastructure, as well as the classroom space to expound on deeper science-related sailing concepts.

As Hancock continued to gestate his idea for the Sailing Science Center, Lund made him aware of an empty airplane hangar on Treasure Island.

Hancock is excited about the former Pan Am hangar’s being home to an interactive museum. “The future site will give people the ability to go to the museum, then go have a firsthand sailing experience if they want,” Hancock said, referring to TISC.

Hancock also gave listeners a glimpse of what Treasure Island will become. “Ten years from now, it will be unrecognizable,” he said, referring to a bombardment of development about to take place. “There will be a tenfold population increase; most of the [existing] structures will be gone.”

We are excited that the future T.I. will be rooted so firmly in sailing. For more information on Hancock’s vision, go to sailingscience.org.

Looking ahead, Ben Shaw said he’s excited about upcoming Out The Gate episodes. “I just spoke with Rich Jepsen, vice president US Sailing and a longtime OCSC instructor (he built the place with Anthony Sandberg). We talked about a lot of things, including making sailing more inclusive.” 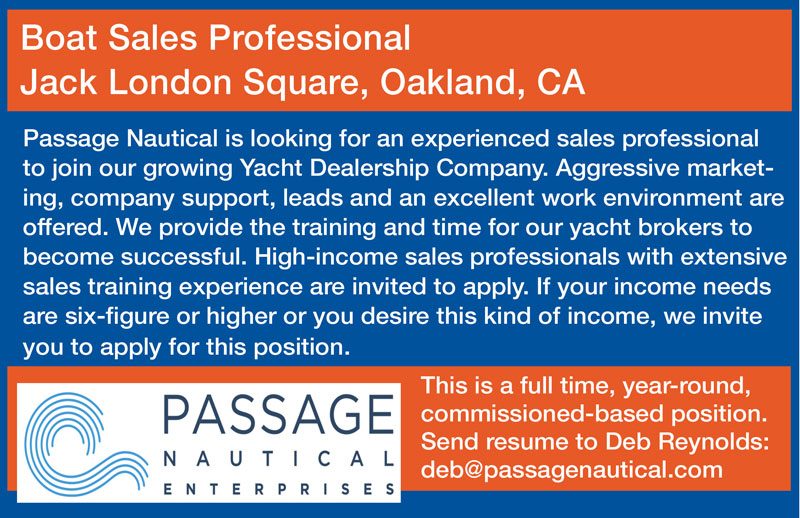 Two days ago, Francis Joyon and his crew of four set off from Hong Kong to tackle Giovanni Soldini and Maserati’s record time of 36 days and change for the ‘Tea Route’ record from Hong Kong to London. IDEC Sport is more than 200 miles ahead of the reference time and gaining. Eating up fast downwind miles in moderate northeasterly trade winds in the South China Sea, IDEC Sport is hurtling toward her first major navigational challenges of this record attempt — the equator and Indonesia’s Sunda Strait, known for light air and strong countercurrents. The team will have to tiptoe through a soft patch in the breeze before they get into faster conditions of running downhill across the Indian Ocean in fresh southeast trades.

Shoreside weather router Christian Dumard will surely have to earn his pay as the weather window approaching the Sunda Strait and Indian Ocean looks highly complex, with multiple highs and lows creating many transition zones across the course.

“We have slimmed down the boat as much as possible,” Joyon explained. “We even left our tender behind in Hong Kong. Giovanni and his crew were very quick in the transition phases. We are going to have to keep up with their pace in the coming days in some very light airs around the equator and on the passage through the Sunda Strait. We hope to enter the Indian Ocean within two days and a few hours. Crossing the China Sea in less than five days would be good enough for us.”

Speaking of Soldini and his 70-ft VPLP trimaran Maserati, they have been engaged in a two-boat match race with the 80-ft VPLP maxi-trimaran Love Water (ex-Ultim Emotion 2/Prince de Bretagne/Sodebo) for over a week in the 16th edition of the Cape 2 Rio race. Despite several problems, collisions and subsequent repairs made at sea, Maserati stayed close to the bigger 80-footer before falling victim to a soft patch and finishing some 7 hours behind Love Water, which was skippered by South African Craig Sutherland and arrived in a time of 7 days, 20 hours, 24 minutes to establish a new course record.

The previous record for the course had been set by Soldini and Maserati (the Volvo 70 monohull) in a time of 10 days, 11 hours and 29 minutes.

SHARE ON Tweet Share Email
Leave a comment
Receive emails when 'Lectronic Latitude is updated. SUBSCRIBE
'Lectronic Latitude: Friday, Jan 17
Hidden on the West Coast
Have We Asked You About Central California Recently?
In what has become something of a New Year’s ritual, we headed down to San Luis Obispo on December 31, 2019, to see friends, and were again charmed by the beachy, sailory nooks that are Cayucos, Morro Bay and Port San Luis.
Hawaii Race Prep
Emergency Rudder Race
Last Saturday, the SSS held an on-the-water seminar to demonstrate emergency steering systems. The seminar included a race, for which skippers deployed emergency steering to get around the course.
Sponsored Post
Corrosion Workshop at Spaulding Center
Malcolm Morgan is a longtime marine electrician, with particular expertise in corrosion issues as they apply to yachts and houseboats.
Breaking the News to the Boss
When You Drop Everything to Sail to Mexico
I was presented with an opportunity to go sailing, but not just for a weekend or a day — this was a three-month commitment. While I admit the decision wasn’t too difficult to make, I did experience a period of anguish over the chaos that would ensue once I told my boss I was going.
Sponsored Post
Westwind Boat Detailing
Westwind Washing, Waxing, Varnishing. Serving the Bay Area for more than 25 years.
More 'Lectronics »
Report Listing