California sailor Katie Love is a woman on a mission. “I want to prove that women can sail 18-ft skiffs just as good as men.” To that end, the 30-year-old blonde, blue-eyed skipper left her job running tugs on the West Coast and went to Sydney, Australia, to compete in this year’s four-month-long 18-footer racing season and JJ Giltinan Championships.

Despite having sailed the supercharged flying 18-ft skiffs in San Francisco and even making an appearance in the 2013 Giltinans with an all-women team, Love found this year’s adventure Down Under somewhat daunting. She worked with San Francisco’s Chad Freitag and his Skiff Sailing Foundation and Australia’s John ‘Woody’ Winning to secure a spot — and a boat — in the highly competitive 18 Footers League’s summer sailing season.

“Katie was the last skipper to join the fleet this year. The boat she sailed was one of the slowest and had the worst gear. Despite that, she sailed consistently above her boat’s handicap,” says 18 Footers League longtime media director Frank Quealey. “The Giltinans are a scratch race, but if you look at the ratings, she earned a handicap-assisted second in one race. That’s a tribute to her keenness, skill and never-give-up attitude.”

Freitag has sailed with Katie for over a decade. “You need a good boat, a good crew, an understanding of the racecourse, strong sailing and communication skills, and a bit of luck to win here in Sydney. Katie was just a few mistakes away from a couple of top-10 finishes this year; and among this level of sailing, that’s saying a lot.”

Joining Katie in Sydney this year were Freitag and Aussie sailor Matt Doyle. “It was hard getting a consistent crew,” says Katie.

“I learned a lot from the guys in the fleet,” she says. “This harbor is pretty tricky. Some guys have sailed their whole lives here, and they tell me it changes every time they go out.”

The level of competition in the Giltinans is intense. American Harry Hamlin won the event in 2002 and 2003. UK sailors won in 1999 and 2004. Australian and New Zealand crews have won the other 60 or so championships. It’s not unusual to find Olympic and America’s Cup sailors going head to head in the 18ers — not to mention a couple dozen state and national champions thrown in for good measure.

“The boys know how to put the pressure on,” says Winning. “It takes time to get to know these boats. Katie is getting there…but don’t expect miracles.”

This reporter caught up with Katie and her crew on the third day of this year’s Giltinans, held on March 1-10. She was a little chagrined when telling me about the first two days of racing, which saw her capsize her red Panasonic Lumix skiff both days as she headed around Shark Island. In the first race of the day, Katie fought her way through the pack but finished near the bottom of the fleet. The second race of the day was a different story. The breeze built throughout the afternoon, peaking at around 25 knots for the spinnaker run home to the finish line.

“It was wild out there,” a beaming Love told me. “Boats were running into each other and capsizing left and right. We just kept our head down and made a nice (10th place) showing.”

“The Big Wind really played to Katie’s strength,” said crewman Matt Doyle. “She handled the pressure like a pro. She’s used to wind like that in San Francisco. I can’t wait for more big breezes.”

The big breezes Katie loves to sail in never materialized over the remaining race days. She and her team finished well back in the pack in the championship.

Katie’s advice to female sailors is simple: “Don’t let anybody tell you ‘that’s not something a girl can do.’ As a girl, you have to work twice as hard to earn the respect of your peers. But that’s OK. Have a thick skin and stick it out. I’m living my dream because I refused to take no for an answer.”

Next up for Katie, she hopes, is sailing her red skiff in the European championships in Italy’s Lake Garda this summer. Here’s betting she’ll continue her quest to prove that girls can handle these big rigs just as well as the guys.

A few months ago, a Latitude reader asked what they should do with their used flares. As it turns out, disposing of expired flares — which are, of course, mandatory on nearly every vessel — can be a hard thing to do.

But on Sunday, April 14, there will be a pilot flare collection event in San Francisco to get rid of expired or unwanted marine flares. 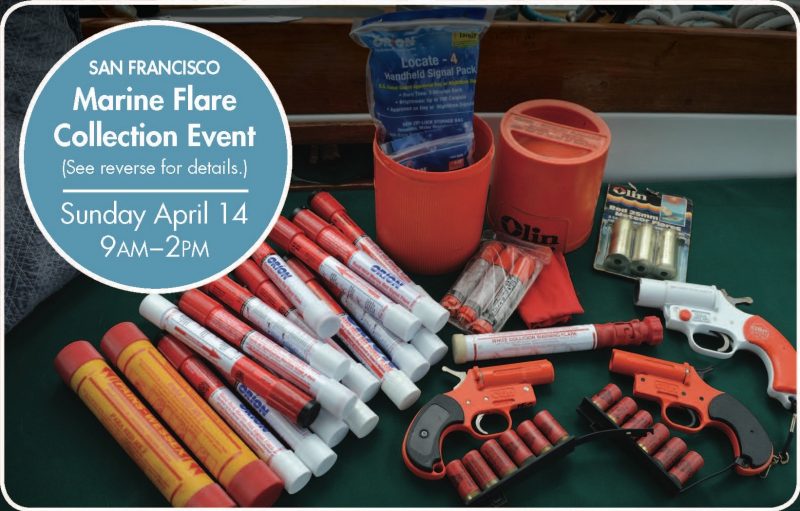 The free event will be at the East Marina Green Triangle, at 200 Marina Blvd in San Francisco between 9 a.m. and 2 p.m.. “There is no limit on the number of flares accepted, however, we recommend that you make an appointment and provide an average number of flares you expect to bring,” organizers said in a press release. “Since this is a pilot collection event, we want to control traffic by limiting attendance to San Francisco residents and boaters who keep their boats in San Francisco only. The types of flares accepted included: hand-held, aerial, parachute, and smoke.”

We hope to see some photos of the Latitude Nation at the event!

Today is the vernal equinox, the first day of spring, and, for most, the start of the peak sailing season. It’s the day the sun crosses the equator from the Southern Hemisphere to the North just as members of the Pacific Puddle Jump fleet are doing the opposite — they are heading north to south toward the Marquesas.

For lunatics it’s also the third month in a row in which we’ve had a supermoon. The oversize moon passed close by the Earth on January 21, February 19, and today, March 20. The moon is full this evening at 6:43 p.m. PDT and will be about 223,000 miles from the Earth, closer than its average 240,000. Since it’s cloudy here, folks in the Bay Area can watch the moon on a virtual telescope in Rome here. The next full moon on the equinox will be in 2030, though it won’t be a supermoon.

We’ve also just moved into Daylight Saving Time, and, with the equinox, the daylight hours will begin to exceed the hours of darkness, allowing for extended sailing time.  It also means that Summer Sailstice is now three months away. Clubs, classes and individuals are now posting their June 22 Summer Sailstice sailing plans here.

Charles Braffet of the Hans Christian 38T Seagate from the Pierpont Bay Yacht Club in Ventura is signed up as he heads west on his circumnavigation. He expects to be somewhere in Southeast Asia in June. The Rose City Yacht Club in Portland, OR, has signed up to participate with their Jack Gainer Memorial Medium Distance Race. In Alameda, Snipe Fleet 12 is planning to race at Encinal YC. SFYC has posted a club race, the Independence Cup. Corinthian YC in Tiburon will be hosting a Friday night race and the Master Mariners Wooden Boat Show. SailtimeSF will host a raft-up in Clipper Cove. The YRA will sending racers off to Redwood City in the Westpoint Regatta. You can post your club, class or individual sailing plans at San Francisco Bay events here.

If you haven’t started already, it’s time to get spring maintenance underway. Run the engine, change the oil, remove mold, mildew and moisture after a very rainy winter, and, if needed, schedule a spring haulout. Help make sure that when the June 22 Summer Sailstice arrives, you’ll be ready to join the Delta Doo Dah, cruise to Half Moon Bay, or take your friends out on a daysail. You don’t want your boat to be one of those sitting at the dock on the solstice weekend.

SHARE ON Tweet Share Email Linkedln
Leave a comment
Receive emails when 'Lectronic Latitude is updated. SUBSCRIBE
'Lectronic Latitude: Monday, Mar 18
Sailor Soccer
Spring (One Design) Diversions
"The season began with a postponement, a game of Sailor Soccer, and a longer postponement back at the docks. 0.5 knots of wind with 4.5 knots of ebb made it hard to get a race off."
Nautical Trivia
I’ll take Maritime Miscellaneous, Alex
Like most sailors, our maritime interests extend beyond sailing. And that news cycle has been eclectic lately. Here are just a few of the odd things that we’ve read about in the last few weeks…
Pacific Sail & Power Boat Show
See KKMI at the Boat Show
See KKMI in Booth BU1 April 4-7
National Offshore One Design
Sailing in the NOOD
Checking in with San Diego Yacht Club from the past three days of racing in the Helly Hansen NOOD Regatta shows three days of tight racing in 12 one-design fleets.
More 'Lectronics »
Report Listing