St. Francis Yacht Club hosted the Spring One Design Regatta on Saturday and Sunday. On Saturday, photographer Chris Ray praised “a fine job by StFYC race committee to get two races in on a very tricky day. Light winds, first from the north, then east, then north again, and finally from the west, made for trying conditions. The runoff from a heavy-rain year keeps an ebb flowing in some places, which in turn makes calling the layline to the windward mark especially challenging.”

J/24 Fleet 17 reported on Saturday’s activities: “The season began with a postponement, a game of Sailor Soccer, and a longer postponement back at the docks. Then the wind filled in for two quick races to kick off 2019. 0.5 knots of wind with 4.5 knots of ebb made it hard to get a race off until pressure built. The fleet ‘river-rafted’ the great San Francisco River almost to the layline.”

Brandon Mercer, crew aboard the J/24 Flight, explains the rules of Sailor Soccer:

“If you could get the ball under another boat’s boom, between the sheet and the vang, you scored. Throw-ins (with two hands, and both feet planted, à la soccer rules) were allowed. Extra credit went to Pablo Arce, who dribbled the ball on the foredeck before kicking it. Eventually someone drew a face and wrote ‘Wilson’ on it, Tom Hanks’ ball companion in Castaway. There were cries of WIIIIIIIIIIIIILLLLLLLLLSOOOOOOOOOON as we punted him between boats. We ended 1-1 before heading to the docks to wait for wind.” In case you’re not familiar with the movie, the lonely castaway’s companion was an anthropomorphized Wilson-brand volleyball.

“The soccer game was pretty funny. Flight scored the first goal. And took home first place once we finally got around to racing.”

Like most sailors, our maritime interests extend beyond sailing. And that news cycle has been eclectic lately. Here are just a few of the odd things that we’ve read about in the last few weeks . . .

Some walls are a good idea. Like ones going up now on some South Sea islands. Whether or not you believe climate change is happening, it’s not an abstract notion in atoll nations like Kiribati, Tuvalu, the Maldives and the Marshall Islands. Rising sea levels are already an inescapable part of daily life in these low-lying islands — many of which are only 6 or 7 feet above sea level. If climate scientists are right, by the year 2100 many of the thousands of islands in this vast area will be awash or gone completely. So the powers that be are doing something about it now. Seawalls are going up or being repaired in many areas, and there are serious discussions about ‘elevating’ many of the islands. No one is sure what kind of landfill would be best and most affordable, where it would come from, or even how high is high enough. As with many coastal areas, the most obvious source is dredging spoils, which would be detrimental to reefs. But, says one official, “I would rather destroy some reef than see an entire culture go extinct.”

In the late 19th century, President Grover Cleveland was having problems. The recession known as the ‘Panic of 1893’ was in full swing, and Cleveland had found a lump in the roof of his mouth. Diagnosed as a cancerous tumor, it was recommended to be removed quickly. So as not to cause more national turmoil, Cleveland decided this should be done in secret. And what better place for a secret operation than at sea, aboard a friend’s luxury yacht? Cleveland was a frequent guest aboard banker Elias Benedict’s 138-ft auxiliary steam yacht Oneida, and the whole affair was made to look like just another fishing trip. Preparations were made, doctors brought aboard, and the surgery quietly done. One clever journalist got wind of it and wrote a story but — déjà vu! — it was labeled fake news and Cleveland denied it until his death in 1908. Only many years later, in 1917, did the lead surgeon himself come clean, and reporter E.J. Edwards was finally exonerated.

Have you heard this one: The ship that sank in the North Atlantic on April 15, 1912, after hitting an iceberg, was NOT the Titanic? It was her sistership, Olympic, which was — ahem — disguised to look like Titanic.

It’s a bit convoluted, so pay attention: In the early 1910s, the White Star Line started construction of three new liners: The Olympic, Titanic and Britannic, in that order. Olympic was the first put into service in 1911, and she made several uneventful Atlantic crossings before colliding with a Navy ship in the Solent and incurring some serious damage. Because the collision was deemed to be Olympic’s fault, insurance would not cover the repair, and the ship languished in port, not making any money. Soooo, (this is where the conspiracy part starts), White Star switched the names of the new Titanic with the Olympic. Each ship effectively became the other. That way, the “Olympic” (really Titanic) could still do her regular runs and make money, while the “Titanic” (really the damaged Olympic) could, well, be scuttled in an ‘accident’ so the company could collect the insurance. Then that damned iceberg appeared and the whole scheme went out the window.

As with most conspiracy theories, this one has more holes than a truck full of Swiss cheese, and personally we don’t believe any of it. But some fact-checking did reveal some interesting actual facts (we’re back in reality now). One was that Captain Edward Smith was in charge for Olympic’s maiden voyage to New York. As Titanicophiles know,  he would later ‘go down with the ship’ on Titanic’s maiden voyage. Also, Olympic was at sea in the Atlantic on the day Titanic sank. She was on the return voyage from New York to Southampton when she received a distress call from Titanic. Though 500 miles away, the captain ordered a change of course toward Titanic and engines at full speed. As it happens, the Carpathia picked up the survivors and Olympic was ordered back on course, never having arrived on scene. In the aftermath, Olympic assisted both British and American investigators who did many surveys, tests and sea trials aboard her in an attempt to fully understand what happened to Titanic. After Titanic sank, Olympic returned to builders Harlan and Wolff to undergo many safety upgrades learned from the Titanic disaster (as did Britannic, still on the ways), including the installation of full-length bulkheads, double bottoms and more lifeboats. 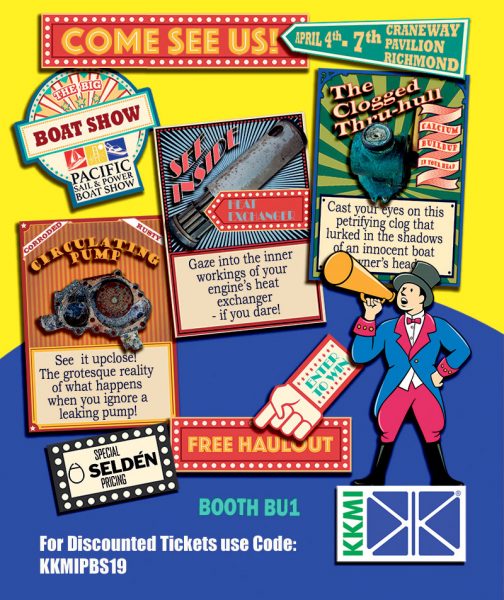 Checking in with San Diego Yacht Club from the past three days of racing in the Helly Hansen NOOD Regatta shows three days of tight racing in 12 one-design fleets. The Ocean Course racers sailed south of Point Loma, and the two Bay Courses were set on South San Diego Bay. Light and shifty winds set the stage for the final day.

Tom Carruthers, of San Diego, won the 15-boat Etchells fleet in his boat, Elizabeth. Carruthers led the field going into the final race, but was over early, forcing him to restart behind the fleet. “We had good boatspeed all weekend, so we knew we would be able to claw back if something bad happened,” Carruthers said. “The funny thing is that between races, we talked about the importance of getting a conservative start.” Sailing with tactician Jeff Madrigali and bowman Matt Reynolds, Carruthers emphasized the importance of keeping a cool head. They ground their way back to fifth, which was enough for the regatta win.

In the Beneteau 36.7 fleet, a father-son duo and their teammates posted a flawless score sheet, winning all six races on Kea. “It’s always super-fun to sail with my dad,” said Chick Pyle’s son, Nick. “This weekend falls on his birthday, so it’s been a special tradition for five years now. He introduced me to the sport, so it’s great to come back and sail with him.”

Going into the final race of the J/105s, a 2-point margin between the top three boats produced a winner-take-all showdown. Chuck Driscoll and his team on Juiced emerged victorious. “My partner, Tom Hurlburt, and I have been sailing this regatta for 12 years,” said Driscoll, ” and we’ve come second many times. This was the first time we’ve been able to put it together for a win.”

Pamela Rose’s J/70 team on Rosebud emerged as the top team in a talent-laden class. She’ll be the San Diego NOOD Challenger for the Helly Hansen NOOD Caribbean Championship.

Jordan and Grant Janov of Los Angeles won the 12-boat 29er class. The skiffs had the only youth class at the event and were the smallest boats of the regatta. Alan Field’s team from Los Angeles dominated the new RS21 fleet. “The boat performed spectacularly,” Field said. “We see them as a viable platform for match racing and team racing. They are really well thought out.” Click here for complete results.

SHARE ON Tweet Share Email Linkedln
Leave a comment
Receive emails when 'Lectronic Latitude is updated. SUBSCRIBE
'Lectronic Latitude: Friday, Mar 15
Matthew Turner
Photo of the Day
With a little luck, the Matthew Turner has been coming along just fine. Thanks to Latitude guru John Skoriak for this epic shot.
Man Overboard
Racer Perishes in Monterey Sunset Series
"During the Wednesday evening race, on his Moore 24, Morpheus, Rick Srigley and crew encountered heavy weather. Rick was washed overboard off the transom. His crew attempted to recover him while calling the Coast Guard."
Always the 15th
Classy Classifieds Deadline
The ad deadline for the March Classy Classifieds is today, February 15, at 5 p.m.
Solo Circumnavigators
Jeanne Socrates Is Halfway Around
Jeanne Socrates is 160 days into her attempt to become the oldest person to sail nonstop and alone around the world. As it turns out, 160 days is the halfway point.
SoCal Racing
Off to Cabo (or San Diego)
Starts in Newport Harbor Yacht Club's Newport Beach to Cabo San Lucas International Yacht Race began yesterday and conclude (with the two-boat Multihull Division) on Sunday.
More 'Lectronics »
Report Listing