Well, it looks like it’s going to rain for the rest of time here in the Bay Area. These last few storms have really packed a punch, so much so that we’ve felt the need to stand watch at home, and see if we need to take in sail or heavily reef the house. We joke — and always enjoy the chance to use sailing terms to describe our non-sailing lives — but two weeks ago outside our office in Mill Valley, Arroyo Corte Madera del Presidio creek overflowed, causing the street, and one of our cars, to flood. We literally had to bail six inches of water out of the passenger side, followed by some serious mold control. Joke’s on us.

The weather has us wondering, Latitude Nation, how are your boats faring? Have you had any docklines snap, fenders explode, or other weather-related calamities? Or, given the biblical scale of this winter, have you seen (and taken pictures of) any bizarre, rain-induced phenomena? We’d like to know, and to see the pictures. Please comment below, or write us here.

And by the way, you don’t have to be in the thick of a heavy winter to play this game. If your boat is snug in a warm, dry harbor and you want to lovingly rub it in our faces, we’d still like to hear from you.

As we reported on Monday, Typhoon Wutip is churning in the Pacific, an incredibly rare occurrence for the month of February. The storm recently “blew up into a Category 5 monster over the weekend,” according to Gizmodo. “That makes Wutip the first Category 5 storm of any kind — typhoon, cyclone, or hurricane — ever recorded in the Northern Hemisphere in February.”

Wutip is now a “super typhoon,” with winds in excess of 150 mph. “Its sustained winds leaped from 125 mph to 160 mph in just 12 hours with gusts reaching up to 180 mph,” Gizmodo said, citing the Joint Typhoon Warning Center.

Don’t forget that the 50th anniversary Golden Globe Race is far from over. After 241 days, nine hours and 30 minutes of racing, three boats — skippered by Uku Randmaa, Istvan Kopar and Tapio Lehtinen — are still in the Atlantic.

“Third placed Estonian sailor Uku Randmaa is hungry,” said a GGR press release today. “Hungry because he has caught no fish during the past week to supplement the last of his food stocks, hungry to finish, and hungry to see his young family after more than eight months alone at sea.”

“Like a camel sensing water, he and his Rustler 36 One and All have put on a spurt over the past seven days, more than doubling his lead over fouth placed American/Hungarian Istvan Kopar. He needs, to because the 65-year- old solo circumnavigator told race organizers this week that he has lost more than 20kg [44 pounds] during the voyage so far, and if he can’t catch fish, there is little left onboard to sustain him over the next two weeks.”

Uku is about 1,200 miles from Les Sables-d’Olonne, and is expected to finish around March 11.

As we approach the release date of the March issue of Latitude — coming to a newsstand near you on Friday — we wanted to remind you of your chance to be a winner.

As you may know, we put a few “Golden Tickets” in the new issue of the mag. They are now worth $25 in credit for the Latitude store. Last month, Ken Leslie and Paul Lauher were the lucky winners.

On Saturday, February 23, just before the Richmond Yacht Club’s Sail a Small Boat Day activities, something amazing happened. After the efforts of many people, the third person hoist in the Bay Area was officially open for business. A larger than anticipated crowd cheered in triumph. (The other two person hoists are at South Beach Yacht Club/BAADS in San Francisco and at Santa Cruz Yacht Club.)

This winter, RYC installed an Aqua Creek EZ Lift hoist. It is affordable, portable and manual. The current model works for assisting people with limited mobility into small boats (or kayaks!), but custom modification are possible.

Most people don’t know how inaccessible our world is until they experience their own limitations with mobility or someone tells them about it. The RYC hoist project was inspired by a friend of many and force of nature, Fernanda Castelo. As an accomplished adaptive/para sailor, she raced Hansas and Liberties on the Bay, but was limited to sailing near the hoist at BAADS (Bay Area Association of Disabled Sailors). Without additional hoists, she sailed past other clubs and could not sail in and stay.

Even bigger is the “50 (now 49!) hoists in 5 years” in California project, spearheaded by Steve Bender of Newport Beach Rotary. Additionally, he is bringing the Hansa Worlds to Newport Beach in 2020. US Sailing has a comprehensive list of adaptive sailing programs around the nation; see www.ussailing.org/education/adult/adaptive-sailing.

The best part of the person-hoist ribbon-cutting ceremony was watching the RS Venture Connect (a super-cool adaptive boat on loan from California Inclusive Sailing) sail away with Ben, an extremely charismatic blind sailor, and two friends. Let’s put sailing past in the sailing past! 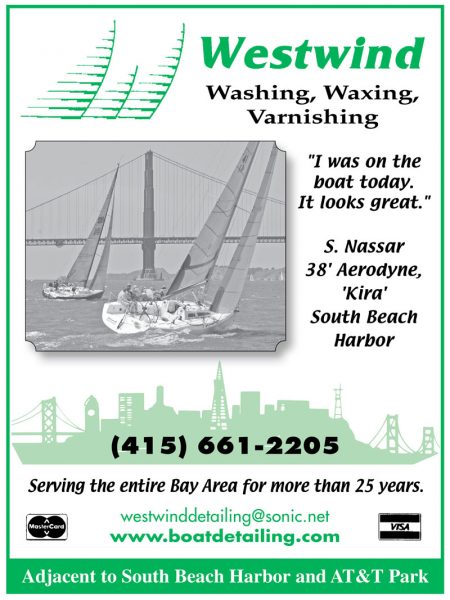 We hope that you join us this Friday, March 1, at Spaulding Marine Center at 6:30 p.m. for a free screening of dare-we-say sailing classic Master and Commander: Far Side of the World. There will be free popcorn, and Spaulding will be selling beer and wine (for prices far cheaper than any Sausalito bar’s). We’ve said this before, but, in this age of streaming movies on your phone, it’s a maxim worth repeating: Movies are best enjoyed with an audience.

We hope to see you there.

Written by Patrick O’Brian in 1969, the nautical historical novel Master and Commander would become the first of a 20-ish-novel series set during the Napoleonic Wars, and centered around captain Jack Aubrey (played in the movie by Russell Crowe), and ship’s surgeon Stephen Maturin (played in the movie by Paul Bettany). It’s said that O’Brian was working on the 21st novel of the Aubrey–Maturin series upon his death in 2000 — that novel was published in 2004. Far Side of the World was released in 2003. The film was a box-office and critical success and was nominated for 10 Oscars — including best film and best director for Australian Peter Weir. (Master won two Oscars for best cinematography and best editing.)

A bit of Latitude/ O’Brian history: The late Bay Area sailing icon Tom Perkins invited Patrick O’Brian for a sail in the mid ’90s. “Since O’Brian obviously loved the sea, it occurred to me to write offering him a fortnight’s cruse aboard my Perini ketch, the 154 foot Andromeda la Dea, for himself and his friends without any interfering presence from myself,” Perkins said, adding that he invited O’Brian to a dinner party, where he soon made a startling discovery about the great English author’s sailing background. “After the other guests departed, we settled into a series of brandies by the fire and I discovered: 1) his capacity for serious drinking greatly exceeded my own; 2) his reserve only eased very slightly in the presence of this unknown American (me) and; 3) his knowledge of the practical aspects of sailing seemed, amazingly, almost nil.”

On Friday, March 8, at 4 p.m., the Smith Rafael Film Center will be showing Manry at Sea — In the Wake of a Dream.

“No America’s Cup boats here; no high-tech links to family and press ashore,” the Rafael writes. “Just a Midwestern newspaper editor with a dream to sail his 13.5-foot Tinkerbelle, alone from Falmouth, Massachusetts, to Falmouth, England. Using only a sextant and dead reckoning, Robert Manry set off on June 1, 1965, and finished his trip 78 days later, in spite of several attempts to ‘rescue’ him. Whimsical and dramatic, this compilation of home movies, newsreels, and TV tape, is pure delight.”

A few of the Latitude staff will be in attendance, and we hope to see you there, too.