When the 14 schooners expected for the 31st running of the America’s Schooner Cup cross the starting line in San Diego on Saturday, March 30, they will represent centuries of sea time, some of yachting’s most famous designers, the determination of dedicated owners who have kept them afloat, and a living snapshot of the West Coast’s sailing heritage.

A rarity today, the schooner rig has its roots in early American cargo hauling and fishing. The graceful vessels, designed with an emphasis on speed under sail, are treasured as examples of maritime history and widely regarded as the most beautiful of all sailing ships.

Several entrants are on course for the 100-year-old mark. Among them are two John Alden designs, both staysail-rigged: Curlew, 82 feet LOA, built in Maine in 1926; and Dauntless, 71 feet LOA, built in 1930 in Connecticut. Rose of Sharon, a Starling Burgess-designed 61-ft staysail rig was also built in 1930. The three vessels are familiar rivals, having first competed against one another in the 1930 Newport to Bermuda race. A Northern California boat, the 46-ft Legacy, was built in Fort Bragg to a 1924 design. Construction began in 1996. Recently berthed in Richmond, Legacy is the third John Alden schooner in the race.

A ‘new again’ entrant, Quascilla, 53 feet LOA, designed by Ralph Winslow and built in 1924, has just emerged from a 15-month restoration undertaken by her owners, Dirk Langer and Theona Stefanis, at the Koehler Kraft yard in San Diego. Quascilla was built in Seattle with stout teak planking, but her iron fasteners had deteriorated, so her restoration entailed complete re-planking with Philippine mahogany, edge-glued and sealed with epoxy, along with significant frame repairs and an engine replacement.

Like other owners of vintage schooners, Langer and Stefanis were willing to rescue a vessel whose heritage spoke to them.

“There’s something particularly beautiful about the schooner design,” Langer said. “The restoration means that Quascilla can be on the water for many more years, and that matters to us. A historic boat is one of the few places where you can actually experience the lives of people almost 100 years ago in the heyday of sailing. It is a rare luxury to have.”

Modern boats will also compete, including the sleek, black-hulled America, a near-perfect 139-ft replica of the vessel whose victory in 1851 against the British Royal Yacht Squadron began the famous America’s Cup races; and the 142-ft Californian, the state’s official tall ship.

The race, which begins and ends off a public beach on Shelter Island, has three handicap classes, with the first start at 11:30 a.m. The 13-mile course takes the fleet out past Point Loma, around three buoys, and back into San Diego Bay. Spectators can watch from various locations on shore, and paying berths are also available on America, Bill of Rights, Californian and San Salvador.

On Monday, February 25 at 7:00 p.m., the City of Alameda will continue to discuss the Request for Qualifications (RFQ) for a boatyard operator at the new Alameda Marina.

Nancy Hird, a member of Save Alameda’s Working Waterfront (SAWW), said the RFQ “did not adequately identify that an operator was needed, instead it was written as though they are looking for a sub-developer.” Alameda Marina disagrees, and points to the document, which says in its overview: “The Alameda Marina Master Plan calls for a RFQ/RFP [Reqest For Proposal] process to identify a boatyard operator. It is anticipated the individual and/or joint-venture respondents to this RFQ will have extensive experience in operating either a boatyard, dockyard, or other marine services facility.”

Becca Perata from Alameda Marina said that they “[believe] firmly that the RFQ/RFP follows Council direction. It was reviewed and commented on by City staff. And it absolutely requests operators. The language is intentionally broad to attract a range of potential operators and to encourage creative thinking in how to approach the opportunity.”

Hird went on to say SAWW is “looking for any potential operators who may have received the RFQ/RFP and who have decided not to proceed because the tone of the document, requirements requested or confusion made operating a boatyard at Alameda Marina unattractive. If you know of anyone, please ask that person to call Nancy Hird at 510-523-0825 before Monday evening.”

For anyone who wants to join the conversation, the meeting will be at Alameda City Hall, 2263 Santa Clara Avenue, Council Chambers, 3rd Floor, Alameda, on Monday at 7 p.m. 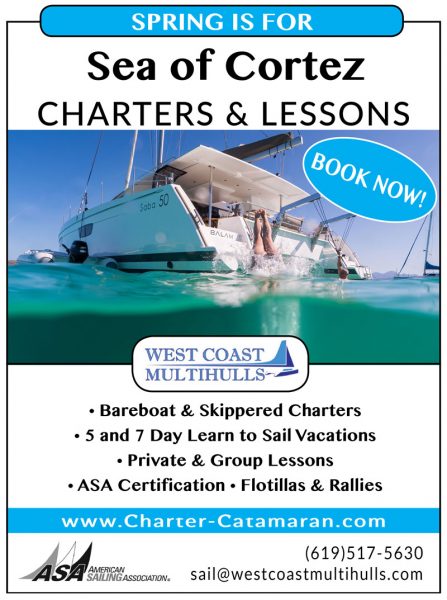 Tomorrow, Saturday, February 23, Richmond Yacht Club is inviting anyone interested in trying out sailing on small boats to their well-rehearsed Sail a Small Boat Day. This successful format has introduced thousands of non-sailors to sailing the Bay and has also served as an opportunity for current sailors to try their hand at a variety of different boats. We should mention — it’s free.

RYC has an ideal venue for anyone to try sailing, with one of the largest fleets of small boats in the Bay Area, ample free parking, a free hot-dog lunch and an enthusiastic club membership who love to share sailing with the just-curious to the fully committed.

If you have friends who’ve said they want to try sailing, make sure they check out this event. It’s a pretty simple set-up. Boat owners will be there with their boats, and volunteers will have sign-up sheets and waivers. Not long after you sign up, you’ll be sailing on the Bay.

If you have a lifejacket and wetsuit you should bring them. If you don’t, the club has lifejackets you can borrow. Wear warm, water-resistant clothes and bring a dry change of clothes for afterward. The forecast looks good: perhaps a little cool but no rain and gentle breezes.

Most of the world’s best sailors started small and started young. Global sailing legends like John Kostecki and Paul Cayard spent most of their early sailing years in small boats, including at RYC. That was long before they went on to winning the America’s Cup, the Volvo Ocean Race and an Olympic medal.

However, many others who started sailing small boats at RYC 40, 50 or 60 years ago are still there sailing small boats. It’s an ideal antidote and escape from our land-bound lives and shockingly easy once you take that first step. If you’ve got kids or friends who you think should try sailing, this is the place to do it. If you’re trying to escape from kids and friends this might also be the right answer!

Bay Area author Jack London said, “The small-boat sailor is the real sailor.” If you or anyone you know ever wanted to try sailing, try out small boats, or are just looking for some free Saturday fun, Sail a Small Boat Day at RYC should be high on your list. It starts at 10:30 tomorrow. For more information click here.

Is your fondest dream to sail the seven seas in a life of adventure and exploration? To demolish the competition on the race course, freeing the fierce warrior within? To leisurely sail with your friends or a sweetheart to the perfect picnic spot on a gently wafting breeze? If you answered “Yes!” to any of these, or if your sailing dreams take on a completely different configuration, a good place to start is Latitude 38’s Spring Crew List Party.

Golden Gate Yacht Club on the San Francisco Marina will again host the shindig. Mark Thursday, March 7, in your calendar, and show up at 6 p.m. (but not earlier — we won’t be ready to greet you). Have a 10-spot ready to hand over to the nice people at the entrance (or just a fiver and an ID if you’re 25 or under).

As usual, along with the opportunity to meet and match up with fellow sailors and hobnob with the Latitude crew, the price of admission will get you a hearty munchies buffet, color-coded name tags to aid in mingling, a door-prize drawing, and an inspirational sailing slide show. GGYC’s bar will be open and selling drinks, and we’ll have Latitude logowear available to purchase.

Sal’s Inflatable Service will bring a liferaft to ‘blow up’ and party-goers can crawl inside to see what it might be like when the call is made to abandon ship. How many of you can fit in there?

Check for updates at www.latitude38.com/crew-party.

You don’t have to be on one of our free crew lists to come to the party. But, if you’re serious about finding a ride or finding crew for your own boat, we recommend signing up online in advance of the party. You can also ‘shop’ for an appropriate sailing cohort by reading the listings and contacting likely prospects. Then, arrange for a first meeting in the neutral territory of the Crew List Party. We offer lists specializing in Cruising, Racing, Daysailing and Mexico-Only.

Crew listings will stay up for one year before expiring automatically, so we ask that you keep your listing(s) up to date. (Yes! You can have more than one free listing.)

Hope to see you at the party!

SHARE ON Tweet Share Email Linkedln
4 Comments
Receive emails when 'Lectronic Latitude is updated. SUBSCRIBE
'Lectronic Latitude: Wednesday, Feb 20
Nonstop Around the Islands
Maserati Breaks Caribbean 600 Record
It was the Multi70 Maserati in a duel against the MOD70 Argo. The two combatants ripped up the islands tour, hitting speeds of 30 knots. Maserati led at Guadeloupe by 12 miles.
Shooting the Breeze
Jeanne Socrates; Randall Reeves; Jokes of the Day
Jeanne Socrates Is Out of Africa About two weeks ago (on February 4), we got an email from Jeanne Socrates.
Sponsored Post
Ad: RYC’s Big Daddy Regatta
Sailing San Francisco Bay
A Brief but Powerful Starting Line Squall
This winter has been pretty wet and wild. The forecast for the Corinthian Midwinters on February 16-17 was a little shaky. Right during the 13-division starting sequence on Saturday, a squall burst through the starting area.
Citizen Stewards
March of the Dockwalkers
Started by the California Division of Boating and Waterways in 1999, the Dockwalker Program encourages people to get trained as certified partners who “inspire and educate boaters to be safe and environmentally sound.
Sponsored Post
Ad: North U Seminar at Berkeley YC
More 'Lectronics »
Report Listing