Yesterday’s press release from the RORC Caribbean 600 called the battle between two 70-ft trimarans “a Spaghetti Western.” It was the Multi70 Maserati in a duel against the MOD70 Argo. The two combatants ripped up the 600-mile nonstop islands tour, hitting speeds of 30 knots. Maserati, skippered by Italian Giovanni Soldini, led at Guadeloupe by 12 miles. That was less than 30 minutes ahead of Jason Carroll’s Argo.

Last night, Maserati crossed the finish line at 20:49:00 AST for an elapsed time of 1 day, 6 hours, 49 minutes, taking line honors and setting a new record — beating the previous multihull record held by Lloyd Thornberg’s Phaedo3 by just over one hour.

Just 48 hours before Monday’s start, the US-flagged Argo capsized at high speed in training against Maserati. It seemed impossible that Argo would be racing, but after a monumental effort by the sailing community in Antigua and Argo’s crew and shore team, Argo made the impossible a reality. On the day of the race start, Soldini agreed to a two-hour delay at Argo’s request.

“It was amazing that this race even happened,” said Soldini. “It was the first time in history that a multihull so big came back from a capsize like that — incredible. I was very happy to agree to delay that start, to race against one of the best teams in the world. We had a wonderful race, very windy, very fast, with very good maneuvers from both teams. We had some technical problems at Guadeloupe. We could not use our Solent for five hours, and we had a small problem with one rudder. After Guadeloupe we could see Argo all the time and they were getting bigger and bigger, but we kept calm and solved the problem. From Redonda to the finish we used classic match racing, trying to keep ourselves between Argo and the finish.”

“It was a miracle that we managed to recover the boat without any major damage,” said Carroll. “We had so many people help us out in Antigua and also from Newport, Rhode Island. And my team worked 24-7 to get the boat back together. We took it hour-by-hour to see if we could get to a situation that we could race responsibly, and when the sun came up on race day, we were ready to go.” Among the crew racing on Argo was Frenchman François Gabart, current holder of the solo nonstop round-the-world record. We’ve covered Gabart’s exploits extensively in ‘Lectronic Latitude.

The Caribbean 600 continues. Just as we were about to post this story, we learned that Americans David and Peter Askew’s Volvo 70 Wizard had taken monohull line honors. The media coverage is particularly good for this event. Check it out at http://caribbean600.rorc.org.

Whenever we see Maserati in a headline it grabs our attention. Some of the Latitude crew enjoyed meeting Soldini in 2013 when he was in San Francisco after setting a record for the New York to San Francisco run (via Cape Horn) with the VOR70. Others on our crew were especially thrilled to go for a ride on the current MOD70 when she was on the Bay in June, 2017, in preparation for the Transpac.

Jeanne Socrates Is Out of Africa

About two weeks ago (on February 4), we got an email from Jeanne Socrates. “Officially now in the Eastern Hemisphere! Soon to be in Indian Ocean — hoping to round Cape Agulhas (and, by default, Cape of Good Hope) in just over a week’s time.”

Well, here’s a screenshot from today of Socrates’ tracker: 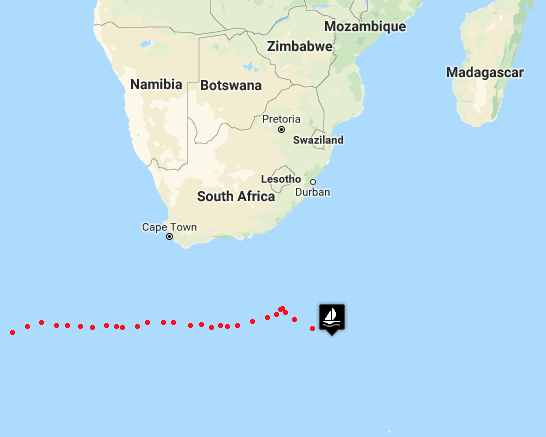 “All we need now is for the mainsail repair to be completed, so we can make better speed . . . All in good time!”

In mid-January, Socrates was hunkered down as a low passed over. She woke up early in the morning while “rocking around in swell. Wind howling in rigging,” she wrote on her blog. A few hours later, Socrates looked on deck to find her “mainsail fluttering in one place — a length along the leech edge has torn and separated from the body of the sail between the top two battens. Will need stitching back into place with reinforcing as soon as possible. Not sure when, since will need to remove the entire sail from the mast to do the work down below; not simple or easy when at sea . . . not good news.”

In the meantime, Socrates has rigged a trysail.

The repairs have been slow going. “Looked at the Gorilla tape used in the repair; it’s not 100% stuck well where the leech material is thick and buckled slightly, so definitely needs reinforcing and covering with the sail material I have — it’s the practicalities of doing what I feel I need to do that has become a big challenge if I’m to have the use of the mainsail again.”

In Other West Coast Circumnavigator News

Meanwhile, after suffering light winds at the bottom of New Zealand, Randall Reeves has finally punched through, and is back in the Pacific Ocean. On a February 13 blog post, Reeves estimated that he had 39 days until re-rounding Cape Horn.

Reeves has also been doing some sail repairs of his own on his #2 headsail.

“Sewing is not something I take to, but with the help of The Speedy [Stitcher] Sewing Awl, a mother-in-law gift from ages ago, progress is being made,” Reeves wrote on his blog. “This is the most intimate contact I’ve had with this sail since installing it on the bow in 2017 . . . everything on it is finely and ruggedly constructed in the extreme. I’m eager to get it flying again.” 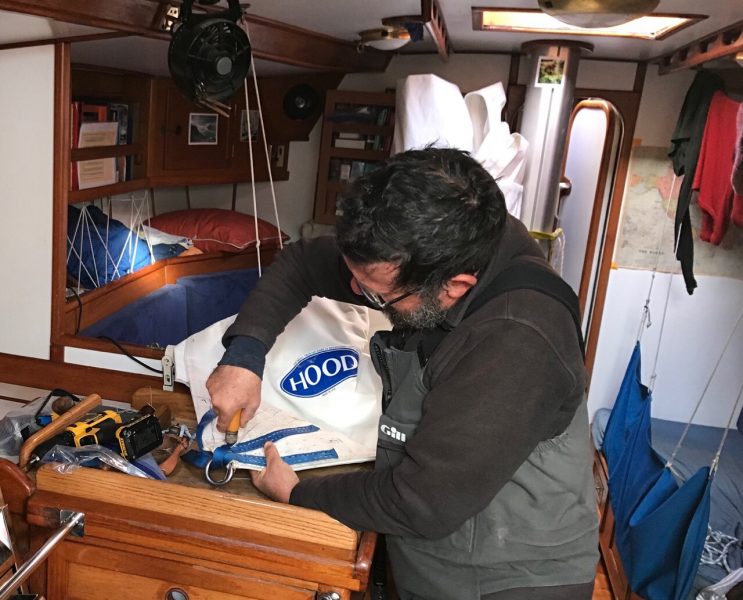 What do you call the fastest sailboat in the world? Usain Boat.

What detergent do sailors use? Tide.

What does a drunk sailboat do? Get Wrecked.

How do you make a yacht look younger? Boat-Tox. (These jokes came via www.jokes4us.com.) 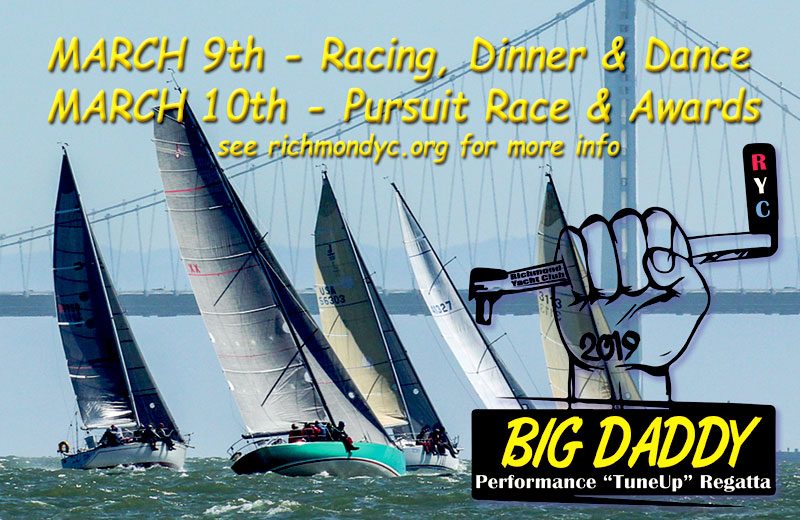 This winter has been pretty wet and wild. The forecast for the Corinthian Midwinters on February 16-17 was a little shaky, but that didn’t deter many. Right during the 13-division starting sequence on Saturday, a squall burst through the starting area west of Angel Island. Luckily, we weren’t starting yet. We had the jib furled and the main reefed. Others weren’t so lucky.

When you’re sailing you’ve got to be ready for anything, and that certainly keeps it challenging and interesting. Winter sailing can be the most interesting of all because it’s so inconsistent. Squalls one minute, warm sunshine and no breeze the next. When you have rain, snowmelt and all of the San Joaquin and Sacramento rivers piling on to a full-moon ebb, sailing feels like running the Colorado River. What could be more fun than that? In the end, that patch of blue sky grew, the sun came out, and we shook out the reefs and had a beautiful day of sailing.

If you’ve got any interesting video or photos of your Corinthian or other midwinter race weekend, send them to [email protected].

Started by the California Division of Boating and Waterways in 1999, the Dockwalker Program encourages people to get trained as certified partners who “inspire and educate boaters to be safe and environmentally sound. These partners distribute boater kits with educational materials while visiting marinas, boat launch ramps, boat shows and events.”

The DBW is encouraging anyone who’s interested in becoming a Dockwalker to attend a free hour-and-a-half-long training class. “During the class participants learn about potential sources of boat pollution and their impact, environmental regulations for boaters, and clean boating practices that prevent pollution from boating. Age range is 15 years and up. The program can document community service hours. Contact the Division of Boating and Waterways and the California Coastal Commission’s Boating Clean and Green Program at (415) 904-6905; [email protected] or visit www.BoatingCleanandGreen.com to register for a class. 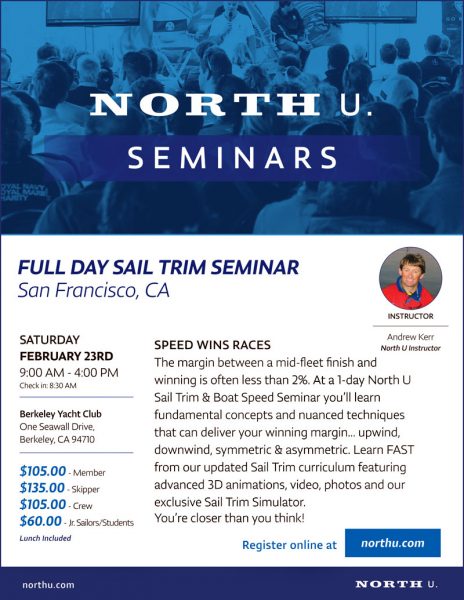 SHARE ON Tweet Share Email Linkedln
Receive emails when 'Lectronic Latitude is updated. SUBSCRIBE
'Lectronic Latitude: Monday, Feb 18
Corinthian Midwinters
Pull the Sheet
As we puttered along, the call suddenly went out to "Pull the sheet." In fact, along with the many large logs and other debris being washed into the Bay, was a large sheet of plastic that needed rescuing.
Drain the Swamp
Politics of Weather Forecasting Grind On
Over the last few years, we’ve been reporting on the issue of privatizing weather forecasting.
Rigging
Check out KKMI’s February Specials
Rolex Big Boat Series
All About ORR
This Wednesday evening, the St. Francis Yacht Club will offer a free seminar, Understanding ORR & ORR-EZ Rating Rules.
Sponsored Post
Come to Latitude 38’s Spring Crew Party
Come to Latitude 38's Spring Crew List Party, Thursday, March 7, 6-9 p.m. at Golden Gate Yacht Club in San Francisco.
More 'Lectronics »
Report Listing