After the first full-on winter storm blew through town last week, there seems to be a bit of carnage in its wake — though not necessarily related to the tempest itself.

On Friday, “A sailor took his vessel out on a rough day after the rain to ‘dry her out,'” according to Stefan Berlinski, who sails his Santana 22 Hamachi out of Santa Cruz. “The gale warnings were reduced to a small craft advisory.” But . . .

“Big swells in the Moss Landing Harbor entrance swamped [this sailor’s] outboard, the only auxiliary. It was windy enough that his halyard fouled and jammed so he couldn’t sail.”

“He got on the beach with a minor laceration to the head. A good landing is one you can walk away from. This was a great landing. The vessel was reusable.”

In Other Unrelated Carnage . . .

Larry Radcliffe spotted this detritus about a third of a mile north of the Santa Fe railroad terminus in Point Richmond. The boat off has apparently been floating near Keller Cove for a long time — since summer at least, according to some of our staff.

“It was spotted in about 10 feet of water Friday afternoon,”  Larry Radcliffe said. “The  Coast Guard was informed.”

Did you find anything weird beached or floating in the Bay after the rain cleared out? Please comment below, or email us here, and please be sure to include your boat name, make and port of call.

In the wake of a winter storm, a weekend of mixed weather offered a variety of conditions for sailors on Bay Area waters.

Seaweed Soup on the Cityfront

On Saturday morning, some last rain squalls blew through, leaving rainbows behind. The northwesterly on the Cityfront had already cranked up well before the start time and built through the afternoon, challenging racers in Golden Gate Yacht Club’s Seaweed Soup Series to keep their boats upright. Death-roll oscillations were the norm on the windy dead-downwind run from Harding Rock to Blossom Rock, but all of the boats that made it out to the race course were able to finish.

Sunday was another story, with bright-blue skies and sunshine that felt warm depending on your particular patch of the Bay. Over by Potrero Point, Richmond YC’s El Toro fleet enjoyed a perfect westerly.

Meanwhile, just around the corner, the racers on Keller Cove endured a chilly northerly.

The bigger boats on the Southampton course got in a full day of racing too.

But, meanwhile, in Sausalito… “December’s Chili Midwinter ended with three bangs and an abandonment,” reports Pat Broderick. “The optimistic boats arrived at the starting area to find fickle winds, sometimes out of the northeast, backing and clocking from north to east — when there was wind. The Sausalito YC race committee tried several course possibilities, keeping the mark boat running back and forth for two hours before calling it a day.”

To see a comprehensive list of midwinter series available to racers in the greater Bay Area, check out our Calendar. We’ll have more on this weekend’s midwinters in Racing Sheet in the January issue of Latitude 38, to be published on December 28.

Out for a short-day sail 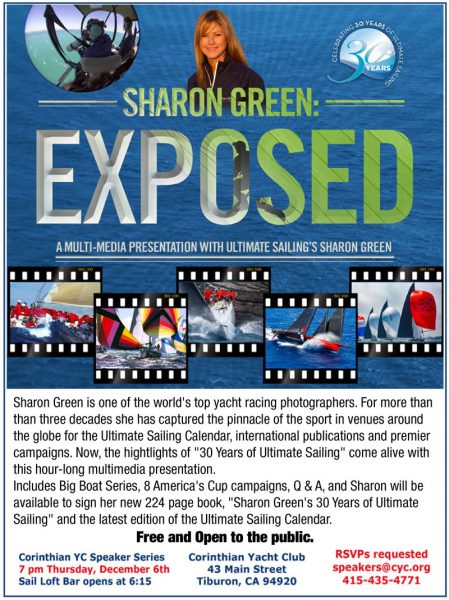 For the fourth time in their eight-year history of competing in the 12-year-old Extreme Sailing Series, Swiss team Alinghi took the title yesterday after a remarkable final Act in Los Cabos, Mexico.

Following 10 months of touring around the planet, Ernesto Bertarelli’s Alinghi team closed the grand finale in first place on the double-points Act leaderboard. Their incredible five-out-of-seven Act wins this year cemented them as victors in the overall rankings. And, Alinghi’s shore team won the award for the best shore crew of the season.

Five teams competed in the spectator-friendly stadium series, with US Team Extreme and Team México joining in the last two Acts. Angeleno Riley Gibbs trimmed the mainsail for US Team Extreme in the final event.

SHARE ON Tweet Share Email Linkedln
Leave a comment
Receive emails when 'Lectronic Latitude is updated. SUBSCRIBE
'Lectronic Latitude: Friday, Nov 30
West Coast Circumnavigators
Randall Reeves Is Round the Horn
After just over 50 days at sea following his late-September departure from San Francisco, Randall Reeves finally reached Cape Horn sometime yesterday after a few days of gale-force conditions.
New Latitude Out
December Issue Hits the Racks
"When I was young, I dreamed of taking off on a sailboat, exploring the oceans, and claiming deserted islands for myself." Those are the words of Martin Machado. Learn where his dreams led him in December's Latitude 38.
Sponsored Post
Ad: Save The Waters You Love
Cruising Rally
Baja Ha-Ha Perkspective
What can I say?The Baja Ha-Ha is one of the great adventures of a lifetime, and you have to do it to get it.
Bay Area Development
Stick in the Mud in San Leandro
As the San Francisco Bay shoreline continues to be developed with high-rent waterfront properties, access to sailing is feeling the pressure.
More 'Lectronics »
Report Listing