One hundred eight Cal 40s were built since they were introduced in 1963 and finished production in 1971, and, at the time, they were considered a radical design. Fifty-five years later they continue to inspire sailors and make themselves known on the race course and the world’s oceans. In our current October issue we wrote about Don Jesberg, who’s renovating hull #103, and just last weekend nine Bay Area Cal 40s gathered at the Encinal Yacht Club for a local reunion.

“We had a great weekend at the Encinal Yacht Club on October 13-14,” reported Rodney Pimentel of the Cal 40 Azure, “Nine boats came out to share stories and discuss boat projects. All but the two newest owners have raced to Hawaii. Fred Cook’s Sequoia is definitely one of the nicest boats in the fleet, but she has some pretty stiff competition from Longboard and others. Seven Cal 40s are currently signed up for next year’s Transpac. Azure and Don Jesberg’s Viva will be representing Northern California.”

Sixty-nine boats have entered the upcoming 2019 50th running of the legendary Transpac race to Hawaii. Right now, the Cal 40 class is the largest one-design class in the event, and it’s likely to stay that way!

Just a few hours after we published a story on Monday about our love for the low-tech autopilot, we were at San Pablo Yacht Club when we met a gentleman who had just read the piece. “Let me show you my autopilot,”  he said (we didn’t get the gentleman’s name with enough confidence to publish it here; if you’re reading this, please email us, and we’ll update this story).

This was the first of several ingenious systems we’ve seen. Luc McSweeney — who we’re going to feature in an upcoming issue of Latitude — showed us two steering-assist methods for his 60-ish-ft pinky schooner Tiger. The first was a “whip,” or a set of tackle with a loose line that gives purchase on the tiller, something that’s advantageous on a boat like Tiger.

With its 2:1 purchase, this “steering assist” (our term) takes some force off the tiller, and allows the skipper to sit more outboard on the vessel while helming.

McSweeney also had a full-on “autopilot” (the pictures of which came out too blurry for publication), which was built from an elasticky line running through a series of blocks. When attached to two fixed points opposite the tiller, the system offered smooth, controlled steering, according to McSweeney — he showed us video of him singlehanding Tiger in 30 knots of breeze.

But this was just the start of the responses we got. “I use bungee cords on the tiller. And yes, it gives me goosebumps just thinking about hands-off sailing, Joshua Slocum style,” wrote Ken Brinkley from Portland, Oregon, about his Cal 29 MkII Rumblefish. Brinkley commented on the feeling of freedom when you can take your hands off the tiller, and watch your boat sail on its own.

“I love to singlehand my Nunes Bear in all kinds of conditions,” wrote Josh Ott of his Bear Boat Kodiak. “Leaving from Berkeley, it’s often several long upwind legs to get anywhere. I use two bits of shock cord, fixed on the port and starboard side, and loop them to the tip of the tiller.”

“I adjust the tension on the bungees using little tensioners of the kind found on tents. This lets me fine- tune the pressure on the tiller.  She can sail all day like that and it frees me up to work around the boat, get a snack, or just enjoy the ride.”

Rod Witel, a US Sailing instructor at Club Nautique, said that when he singlehands Colgate 26s, he ties “a long bungee cord between the port and starboard stanchions, and tie its center to the tiller. I can vary the tension on the tiller by the number of tiller wraps. I use a bungee in lieu of a non-elastic line because it allows me to move the tiller without having to untie a knot or slip off a line.”

Grant Kiba said that he has a tiller extension with a “locking pocket” on his Ericson 27 Take 5.

“I found that I can lock the tiller when going upwind and like you stand at the transom and make the smallest weight changes to steer. It’s like a big windsurfer and the feeling is similar to riding a bike with no hands! Sometimes I sit on my own rail for miles! My friends say that the boat sails better without me steering. I’m inclined to believe it’s true. I sail on the Sacramento River between Antioch and Pittsburg. If you see me on the rail, give a wave. There’s nothing like it.” 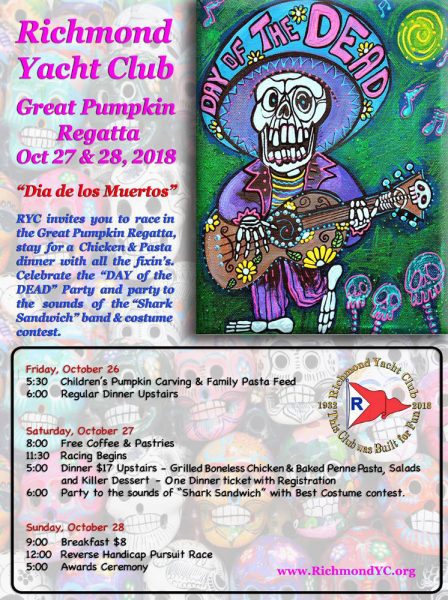 An extensive race village is set up on Harbor Island for spectators, and admission is free. Can’t get to San Diego or get away from the office to watch in person? There’s an app for that (find it here).

Racing was off to a slow start yesterday, as the breeze played hard to get. John Craig postponed until 3 p.m. He extended the deadline and got in six races. Series frontrunners Alinghi took four wins to lead the San Diego Act. The event continues through Sunday.

Los Cabos will host the final Act on November 29-December 2, and a Mexican team has also joined the fleet for these last two events of the series. Get caught up with the Extreme Sailing Series at www.extremesailingseries.com. 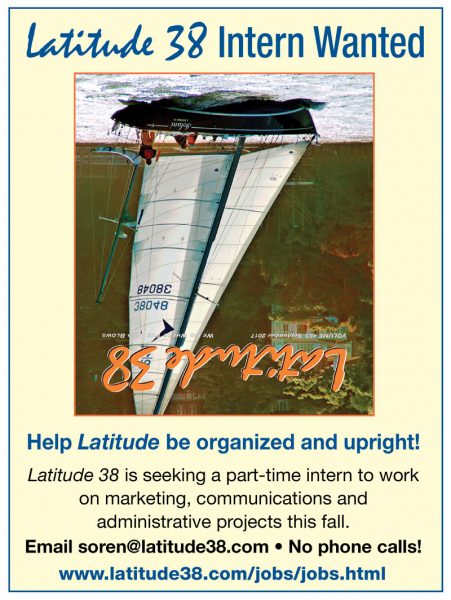 SHARE ON Tweet Share Email Linkedln
Leave a comment
Receive emails when 'Lectronic Latitude is updated. SUBSCRIBE
'Lectronic Latitude: Wednesday, Oct 17
Newsy Week in Golden Globe
The week is only half over but it’s already been a newsy one in the Golden Globe nonstop solo around-the-world race.
Mike Cunningham
Go East Please East OMG East
Mike Cunningham reports: No, I don’t want to look at that chart. I don’t want to look right and see home, almost 1,700 miles away.
Sponsored Post
Ad: Pacific Union – 60 Trinidad Dr.
New Nonprofit to File Lawsuit Against BCDC
Good things often emerge in the face of adversity. We have been reporting on the aggressive tactics of the Bay Conservation and Development Commission, or BCDC, regarding Westpoint Harbor in Redwood City, and against John Sweeney at Point Buckler in Suisuin Bay.
Don’t Forget About Sergio
While this year’s East Coast hurricanes have wrought horrendous damage in Florida and the Carolinas, Hurricane Sergio flew under the radar, though it already has its own Wikipedia page.
More 'Lectronics »
Report Listing