When 24-year-old Tracy Edwards, a stewardess who was working on charter yachts, decided to put together an all-female boat for the 1989 Whitbread Round the World Race, the doubt, lack of financial support, and raw sexism she and the team encountered was unparalleled by anything before seen in sailing. At the time, the sport — especially the offshore racing facet — was male dominated, though not without exception. Let’s not forget that in 1851, Eleanor Creesy was navigator aboard the commercial clipper ship Flying Cloud, which set a record for fastest passage between New York to San Francisco, a benchmark that stood for 138 years.

The story of Maiden is one of triumph over adversity. Given the extraordinary strides those women had to make, we hope it’s also a story that will take its appropriate place in history. With the last running of the Volvo Ocean Race being fully co-ed, we’d like to think that the sailing world has achieved some degree of equality — though we can’t say for sure. (Ask the women’s World Cup soccer team how they feel about equity.)

Maiden is now the subject of a documentary film that’s hitting Bay Area and West Coast theaters this week. 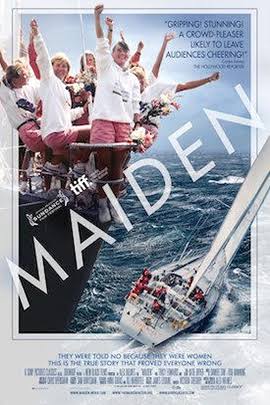 Like other adventure stories our there, the story of Maiden doesn’t necessarily represent something all of us want to actually do, but it’s an adventure that can spark our imaginations. The Latitude Movie Club will have a full review of the film in the coming weeks.

Not in the Bay Area? Not to worry — the film will be released widely around the world.

Receive emails when 'Lectronic Latitude is updated. SUBSCRIBE
'Lectronic Latitude: Monday, Jul 8
The Figure 8 Voyage
Craving a Sailing Adventure Story
Randall Reeves had been in port in Halifax, Nova Scotia, for about a month, when we started losing our minds.
Washing Waxing Varnishing
Westwind Boat Detailing
Westwind Washing, Waxing, Varnishing. Serving the Bay Area for more than 25 years.
Getting It On in Antigua’s ‘Off’ Season
Though weather gurus and insurance companies declare hurricane season to ‘officially’ run from about June 1 to November 30, the peak activity is usually around September and October.
ArtFest and More
Delta Doo Dah Bash This Weekend
The Delta Doo Dah promised to "turn it up to 11" this year, and various friends new and old will help us live up to that promise on Saturday, July 13. Delta Bay Marina, off the San Joaquin River on the Delta Loop, will host a shindig that just keeps ramping up.
More 'Lectronics »
Report Listing