Both French teams — top-ranked Women’s Division skipper Pauline Courtois and Open Division skipper Maxime Mesnil — and defending Nations Cup Women’s champion Nicole Breault scored all picket fences on the first day of racing on Wednesday at the 2019 World Sailing Nations Cup. St. Francis Yacht Club is hosting the Grand Final on the Cityfront this week. Ten women’s division teams from around the world faced off in a round-robin format on two east-west race courses. Ripples of current snaking across the courses made for challenging conditions for those new to sailing on San Francisco Bay. The morning’s light northerly winds eventually clocked to the west and built to the high teens, delivering more robust afternoon conditions for the nine Open Division teams. The tail end of a strong flood pushed competitors close to shore seeking relief and moments of lift in reversing ebb.

The Nations Cup match-racing event began in 1991. Following a series of Regional Finals, the top crews meet at the Grand Final. Vladivostok, Russia, hosted the last edition of the Nations Cup in 2015. Thirteen nations are represented in the San Francisco event.

On Wednesday, Bay local Nicole Breault raved about the caliber and tightness of competition. “You have to capitalize on their mistakes, because they’re capitalizing on yours.” About her match against Southern California skipper Allie Blecher she commented: “We were trailing around the leeward mark, but really close. We rolled into a tack, got our bow forward, and realized we’d rolled over our spinnaker sheets.” The drag of the sheets slowed them down during the short second beat, but bow Hannah Burroughs scrambled all over the deck recovering and retying them. “We rounded, tucked to the inside, got control of them, and had the most perfect spinnaker set. We ended up passing them and winning the race.”

On Thursday, Breault, Mesnil and Courtois continued to dominate. Breault went into the day knowing she’d be up against the top-ranked skippers at the competition and was hoping to lock in at least two wins. “We raced Anna Östling [SWE] in the second match, and I knew it was going to be huge. It was getting windy. We were able to luff her in the pre-start and timed it perfectly, holding it just long enough so she had to peel off to port, and we were able to start ahead. On that upwind, we felt ready for the breeze. We were hiking really hard, trimming in sync, and we felt really fast. The boat handling and pre-start action has been phenomenal.”

Congratulations to Nicole Miller, who won our raffle of a Jim Dewitt original painting at last week’s Boat Show.

Thanks to everyone who entered the raffle. We raised nearly $500 for Bay Area youth sailing programs.

And thanks to the maestro himself, the indefatigable DeWitt, for his generous donation to both youth sailing, and to Latitude 38’s April cover for the last three years. There is no Wikipedia page on our favorite Bay Area artist, not that he needs one. “As a young man in 1963, Jim won the North American Men’s Sailing Championship,” his website says. “In 1992, he was recognized as the top American Marine Artist by the official America’s Cup Gallery in San Diego. In 2013, Jim was named Artist in Residence by the Golden Gate Yacht Club, host of the historic 34th America’s Cup in San Francisco.” 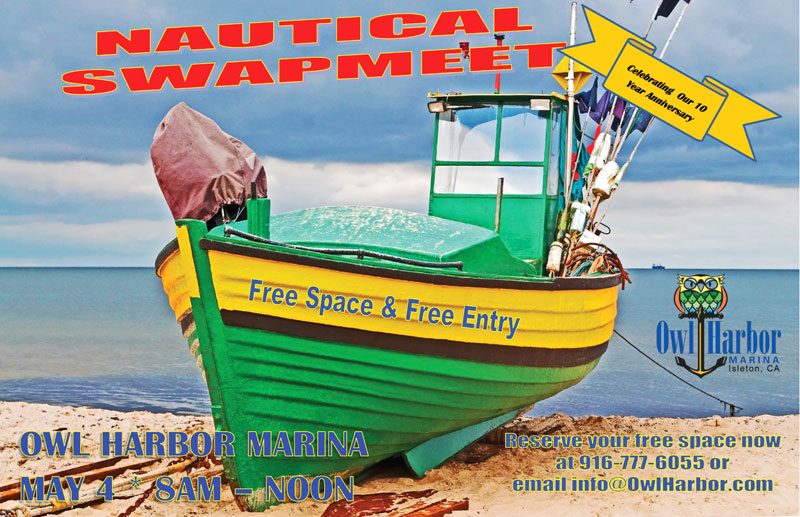 If you’ll be cruising south this fall, and intending to do the Baja Ha-Ha, the Grand Poobah highly recommends that you mark noon on May 8 on your calendar. For that’s the moment entries will first be accepted for the event, and berth space in Cabo San Lucas is based on how early a boat was signed up. To give you an idea of how important it is, last year something like 64 boats signed up in the first 24 hours.

The Baja Ha-Ha is, of course, the annual 750-mile cruisers’ rally from San Diego to Cabo San Lucas with R&R stops at Turtle Bay and Bahia Santa Maria. The event is open to boats 27-ft or longer that were designed, built, and have been maintained for open ocean sailing, and which will be crewed by more than one person who has overnight offshore experience. To date more than 10,000 sailors on over 3,000 boats have done the Ha-Ha.

There are two major changes in this year’s Ha-Ha. First, the event will run November 3-16, which is one week later than recent years, and two weeks later than for many of the previous Ha-Ha’s. The later date means all the fishing tournaments will have been completed for the year in Cabo, meaning there will be many more open slips in the marina. In addition, the later date increases the buffer between the end of tropical storm season and the Ha-Ha.

The other major change is that the fleet will be spending one more day at pristine Bahia Santa Maria, which has always been the favorite stop of the Ha-Ha fleet, and one less ‘official’ day in Cabo San Lucas. The primary reason for the change is that there are no longer any tenable venues for a Ha-Ha Beach Party in Cabo San Lucas. But no worries, we’ll still have the world famous From Here to Eternity Kissing Contest. The extra day in Bahia Santa Maria also slows down the pace of the event.

There are many reasons sailors have done the Ha-Ha. Among the most common the Poobah has heard is that it gave them a definite starting date. “We’d still be tied up to the dock if it hadn’t been for the fixed Ha-Ha starting date,” is something the Poobah has heard over and over again. Another reason is that during the course of the Ha-Ha, new cruising friends are made for the rest of the season in Mexico, the Pacific Puddle Jump to French Polynesia, and even for life. The Ha-Ha experience creates tremendous friendship bonds.

There are additional reasons: cooperation from the Mexican government, daily roll call and weather reports, safety in numbers, a tremendous knowledge and parts base in the fleet, terrific social events, a children’s VHF net, and discounts that can easily exceed the entry fee. Indeed, some folks have signed up for the Ha-Ha just to get the discounts.

A few mariners have wondered if the Ha-Ha isn’t too much of a social event, what with the Kick-Off Party, the cruiser versus Mexican kids baseball game and beach party in Turtle Bay, the live rock ‘n’ roll beach party in Bahia Santa Maria, and the Squid Roe dance party and the awards ceremony — everyone wins an award — in Cabo San Lucas. The reality is that attendance isn’t required at any of these. Indeed, few people make all of them.

As for room for boats, it’s true that it takes planning get a slip in San Diego proper before the Ha-Ha, and a slip in Cabo after the Ha-Ha might take a day or two. The anchorages at both Turtle Bay and Bahia Santa Maria can hold 1,000 boats each. The result is that you can have as quiet or as social a Ha-Ha as you want. You get to chose. If you can’t decide whether or not the Ha-Ha is for you, the Grand Poobah recommends that you talk to people who have actually done one.

The Ha-Ha will be managed by Richard Spindler, founder and for 40 years publisher of Latitude 38, who has managed all 25 previous Ha-Ha’s. He’ll get tremendous assistance from Patsy ‘Le Reina del Mar’ Verhoeven, who will be doing her 11th Ha-Ha — in addition to having made side trips to the South Pacific and Pacific Northwest — with her Gulfstar 50 Talion. Also assisting will be Doña de Mallorca Spindler, who has done 23 Ha-Ha’s on the Surfin’ 63 mothership Profligate — and who has done 19 Baja Bashes with the same cat.

Notice of the Rally and entry details can be found at www.baja-haha.com, and questions answered at the Baja Ha-Ha cruising rally Facebook page. The Grand Poobah sincerely hopes to see all of you at the Ha-Ha Kick-Off Party on November 3 and at the starting line on November 4.

SHARE ON Tweet Share Email Linkedln
Leave a comment
Receive emails when 'Lectronic Latitude is updated. SUBSCRIBE
'Lectronic Latitude: Wednesday, Apr 10
Boat in Distress
Troublesome Trimaran Smashes on Rocks in Humboldt
On Sunday, the 45-ft Midnight Sun, a San Francisco-flagged trimaran, ran aground in bad weather on the rocky waters off Shelter Cove in Humboldt County.
Son of a Sailor
The (Jimmy) Buffetting on ‘ti Profligate’ Continues . . .
Readers — On Monday, we brought you a little tale from Latitude founder Richard Spindler’s Facebook page, where a certain salt-shaker-searching singer paid him a visit, and brought some good dope (which is to say, some interesting gossip about a storied boat, Escapade, and how she’s being rebuilt).
Sail Camp
Alameda Community Sailing
First camp starts June 10. Register now at SailAlameda.org.
Editor's Notebook
Race Notes from the Boat Show
Those of you who read Racing Sheet in Latitude 38 are no doubt familiar with the odds and ends that populate Race Notes. This is an online version — tidbits culled by our racing editor during last week's Pacific Sail and Power Boat Show.
Maritime Art
Answer to a Bit of Trivia
Last Friday, we asked you if you knew in what TV show the painting Mouth of the Delaware by Thomas Birch made an appearance.
More 'Lectronics »
Report Listing