Captain Kerry and the crew of Cetacea, a 42-ft one-off pilothouse cutter, submitted these photos, taken on St. Patrick’s Day, of “a steampunk sailing adventure to celebrate the last weekend of winter, and the first really nice weekend for months. We sailed to the coast, but had really low winds much of the day.”

On Monday’s we like to surf the www-dots to see what kind of sailing news percolated over the weekend. The web brought us to Webb. Well, sort of.

Webb Chiles is reportedly struggling through light winds off the west coast of Central America. We say reportedly because his last blog post was nearly two weeks ago from the Balboa Yacht Club in Panama. “I’m actually not gone until tomorrow morning, but shortly after posting this, taking my last fresh water shower for the indefinite future, and filling a one gallon plastic container with water, I will ride the launch out to Gannet and leave the land and Internet behind.”

But we heard it from a little bird that Webb has been slogging through some serious wind holes on the final leg of his circumnavigation. We wish him smooth sailing into San Diego.

Teaching Leadership through Sailing? Of Course

“Leadership lessons pop up in all aspects of life, but skippering a sailing yacht offers a glimpse of the deep end. With weather, wind and waves to contend with, a crew to cajole and keep safe, navigation to be worked out, and an expensive boat to maintain, strong leadership is a must.”

So read a story last week from CNN, which quoted the philosophies of several notable skippers, including Carolijn Brouwer, Ian Walker and Tracy Edwards.

The piece was broken into subsections that could have been a motivational speech on a corporate retreat, including: unlocking potential, deciding between a democracy or dictatorship, instilling confidence, being humble and transparent, and taking responsibility.

So the next time your boss says that the team needs to better gel, be sure to email them the link to this story with the subject line: You Need to Take Us Sailing.

Last week, The Ocean Race came out of the digital murk to reveal its new brand identity.

“Formerly known as the Whitbread Round the World Race (1973 to 1997) and the Volvo Ocean Race (2001 to 2018), The Ocean Race is the premier, fully-crewed, offshore race in the world, and a pinnacle event in the sport of sailing,” an The Ocean Race press release said. “Although now under new ownership, The Ocean Race retains Volvo as a premier race partner.”

The first Iteration of the newly branded The Ocean Race will start in 2021 from Alicante, Spain. This year, there will be not one but two classes of ultra-fast boats racing: “The high-tech, foiling IMOCA 60s and the one-design VO65 fleet that provided the closest race in the history of the event in the last edition.”

Analog Wisdom in a Digital World

We came across an old version of, like, a Kindle or an iPad, or something. The battery seemed low, but we were able to glean a quote from a thoroughly analog source that we want to impart on you, Latitude Nation, in the hopes that you start the week keeping a weather eye to the water.

“There is nothing like lying flat on your back on deck, alone except for the helmsman aft at the wheel, silence except for the lapping sea against the side of the ship. At that time you can be equal to Ulysses and brother to him.” — Errol Flynn (Captain Blood himself) 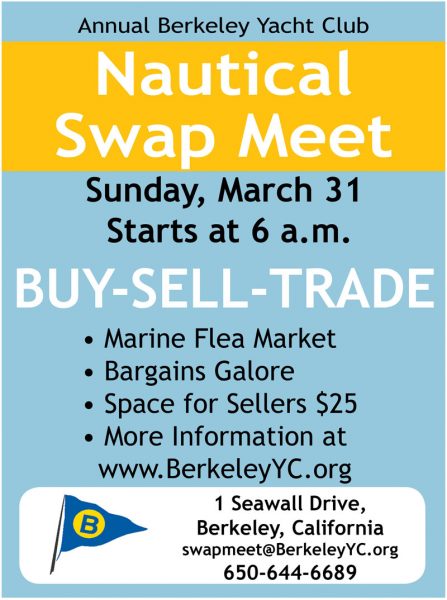 Since it began last July, we’ve been calling the 50th anniversary of the Golden Globe Race the most grueling ocean racing event in recent memory.

We can’t believe how much we’ve been understating it.

The 66-year-old Kopar suffered steering problems “almost from Day 1,” according to a GGR press release, and “overcame setback after setback throughout the race. The water tanks in his Tradewind 35 yacht Puffin became contaminated soon after he sailed down into the Southern Ocean, and by Cape Horn, the black mold growing inside the boat became so bad that his health began to suffer.”

But, like a movie where we watch the main character endure sadistic torture, this was just the beginning of Kopar’s (and other mariners’) troubles.

“He happened to arrive back in the Bay of Biscay shortly after the container ship Great American had caught fire and sunk, 180 miles due west of Les Sables -d’Olonne, generating large tracks of oil and chemical pollution on the surface being blown onshore. And if that was not enough, Kopar had to pick his way through a web of ship’s containers floating on or near the surface. On Tuesday, he was down to his last litre of drinking water but dared not process any sea water through his emergency desalinator, fearing the pollution would clog up the unit’s membrane.”

“His steering problems centred around Puffin’s wind vane self steering which Kopar admits he had failed to test adequately during sailing trials before the race start on July 1st. He first reported the problem on July 10, but continued for another seven days before announcing that he was exhausted by lack of sleep and would stop in the Cape Verde Islands to replace the unit. He pulled into Sao Vincente on July 19 and joined the Chichester Class for making one stop, only to find that the replacement wind vane would take a further week to arrive.

“A night’s reflection at anchor led Kopar to realise that his Windpilot wind vane had been wrongly assembled, and once this had been corrected, and knowing that he had not stepped ashore or gained any outside assistance, he applied to return to the GGR classification. This was granted, but the GGR Committee awarded him a six-hour penalty for going into port and a further 18 hours for using his emergency satellite phone.

“On November 20, a navigation error led him into the Southern Ocean no-go zone, which led to another six-hour 40-minute penalty – 24 hours 40 minutes in total. Kopar should have served this in a ‘penalty box’ at sea, but because of continued issues with steering and health problems he faced from all the mold growing inside the boat, the GGR Committee ruled that this additional time would be added at the finish.”

When he rounded Cape Horn on January 1st, Kopar scattered his father’s ashes. “That is one of my best memories” he said.

“It was torture for me. My self steering failed almost from day one. The boat itself did not have a problem. It was I who had the problems. Luck was just not with me. I think I’m done with sailing now and will take up gardening instead” he joked.

“Kopar’s return leaves just one more skipper at sea — Finland’s Tapio Lehtinen and his Gaia 36 Asteria, who is still 4,227 miles from the finish. He is not expected to finish before mid-May.”

Bummer. The GGR award ceremony is in April. Hopefully they will let Lehtinen use his satellite phone to listen in — and maybe airdrop him some of the champagne.

SHARE ON Tweet Share Email Linkedln
Leave a comment
Receive emails when 'Lectronic Latitude is updated. SUBSCRIBE
'Lectronic Latitude: Friday, Mar 22
Offshore Yacht Racing
Cabo Race Complete
Of the 31 boats entered, 24 completed the 800-mile race. The Swan 60 Good Call! made a good call to hunt for some breeze offshore. The move paid off.
Circumnavigators
Randall Reeves Re-Rounds Cape Horn
We got the following email from Randall Reeves not long after we posted ‘Lectronic on Wednesday:  Well, Mo is around and has passed for the second time this passage under Cape Horn, thus completing her circuit of the Southern Ocean via the Capes, non-stop and solo.
Sponsored Post
Brickyard Cove Marina
Rates, rental forms and details on what Brickyard Cove has to offer.
Baja Ha-Ha Flashback
Mexico Cruising Memories Still Being Made
Tim Dick of the Lagoon 42 Malolo, who sailed in last fall’s Baja Ha-Ha, wrote in to send a few favorite photos of the trip south.
Boat Show Raffle
Win This Painting
You saw it here first. Jim DeWitt painted this original watercolor, titled Kids at Play, specifically for the cover of our April issue. You could take home the framed painting. We'll conduct a raffle, with the proceeds benefitting Bay Area youth sailing programs.
More 'Lectronics »
Report Listing