Greetings from 47°S and 122°W. That position is significant; it’s the same longitude as San Francisco, although the latitude is some 5,000 miles further south. I’d wave from the masthead, but I think such might still be below the horizon.

Day 152 since our San Francisco departure. In those five months, we’ve completed 20,855 miles of the Figure 8 Voyage and have just 2,117 miles to a Cape Horn return (our first rounding, as you will recall, was on November 29 of last year). We’ve now crossed well over 300 degrees of longitude of the 360 degrees needed to complete the Southern Ocean circle and will soon seek to close this *first* loop of the Figure 8. The long slog up the Atlantic is next.

All well aboard. Big issues in the Pacific thus far have been on-again-off-again wind. A blasting gale will be followed by calm, even down here. The whole purpose of rounding at such a high latitude (compare the Golden Globe Racers at 39°S to 42°S) is to stay in the stronger winds. But I think we’ve had more calms in the last month than the entirety of the voyage before New Zealand. So, the Pacific leg has, thus far, been slower than the Atlantic and Indian.

All the food lockers are beginning to show signs of use. I ran out of cookies long ago, and I’m close to running out of chocolate bars, the heavy, dark, bitter-sweet kind.

I’m down to my last 30 cans of beer, too. I started with only 185 cans for a 200+ day voyage. Just couldn’t cram any more aboard than that. I shudder at the thought of the beer-less day to come. Though there is whiskey and some red wine, so all is not lost.

Hope things are well up north.

Latitude Nation — Reeves also posted this video on his blog:

When you leaf through old issues of Latitude, a few things might . . . ahem . . . jump out at you. We’re not talking about the sepia-colored photos, the big hair or the beamy boats. We’re talking about skin.

Since its inception in 1977, Latitude 38 featured lots of people in the buff, most of which was represented by young women — but more on that in a second. We can’t say exactly when these photos stopped appearing in the magazine, though we can certainly trace the comments that these images stirred. We once received a letter from a teacher who said they wanted to have Latitude in their classroom, but could not because of the occasional picture of sailors wearing only what nature gave them. Conversely, since the faucet of nude photos has dried up, we’ve also gotten comments bemoaning their absence. “You guys are doing an OK job since taking over from the Poobah,” a letter from last year read. “But I miss the pictures of nekked girls.”

The times, they have certainly a-changed. It’s not just the culture at large around us, it’s also culture, attitudes and ethics of publishing. The early editors at Latitude would tell you that most (but not all) of the young, scantily-clad (or not-clad-at-all) women that appeared in the first few hundred volumes sent us the photos in question. We weren’t always out there leering with our cameras, in other words. We could also point out that attitudes about nudity ebb and flow with generations. Many sailing YouTube channels feature buxom women, as well as shirtless dudes (though, again, the women tend to feature more prominently). It’s quite a scoop we’re unearthing here, but, sex sells, especially in the world of self-produced sailing content.

And, oh yeah, as we hinted, it wasn’t just naked ladies and male photographers in those early Latitudes . . .

As always, we’re curious: What do you think? 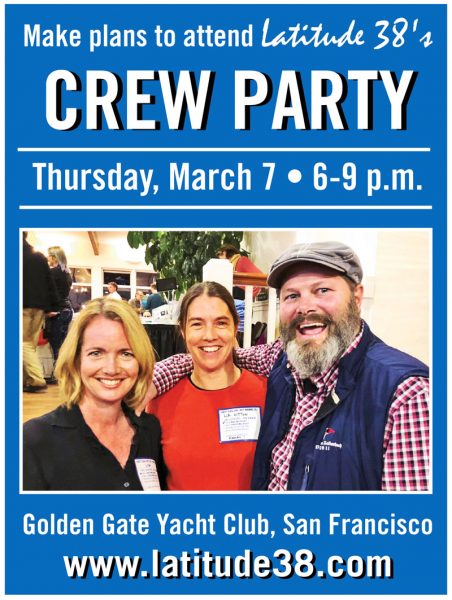 “Fantastic first day,” reported Charles Wilding this morning from the UK-based Nautitech 40 Wilderness. “Spinnaker up all day; put in second reef at sunset. Winds picked up as predicted… gusting 25.” Wilderness is one of 100 boats currently registered for the 2019 Pacific Puddle Jump. Although fleet members hail from more than a dozen different countries, they’re all headed to a common destination: the fabled isles of French Polynesia.

Charles and his wife Fung Lai set sail from Balboa, Panama, yesterday. But prior to that, they were among 140 sailors who gathered late last week in Panama to attend Pacific Puddle Jump sendoff events staged at opposite ends of the Panama Canal. Balboa Yacht Club co-hosted the first one. Shelter Bay Marina (on the Caribbean side) co-hosted the second one. A third event — supported by Latitude 38 — took place yesterday at the Vallarta Yacht Club in Nuevo Vallarta, Mexico. At least 60 PPJ crewmembers attended.

Who’s doing the Pacific Puddle Jump this year? Sailors young and old from more than a dozen nations.
Video ©2019 Latitude/Andy

Thanks to support from the newly formed South Pacific Sailing Network, this year’s seminar/celebrations were more impressive than ever. Multimedia presentations narrated by a team of regional sailing experts from Tahiti, Fiji and New Zealand gave detailed overviews of their countries’ attractions, which filled the heads of the Puddle Jumpers in attendance with facts, figures and exotic imagery.

This year, you’ll be able to follow the progress of many fleet members on the CruiserSat.net website, a multi-function system that records daily check-in data plus status comments, and plots the courses of all who opt in. It’s a clever system that allows participating boats to check in via many electronic devices, including email via Ham/SSB radios linked to Pactor modems, and satellite text messaging from devices such as an Iridium GO!, Garmin inReach or SPOT Messenger. Individual boats can also request the locations of any fleet boats within a specified range, such as a 200-mile radius. The idea is to make the crossing a bit safer, while allowing fleet members to interact if they choose to. We wish the 2019 fleet the best of luck.

SHARE ON Tweet Share Email Linkedln
Leave a comment
Receive emails when 'Lectronic Latitude is updated. SUBSCRIBE
'Lectronic Latitude: Monday, Mar 4
Shorthanded Sailing
Duos Race Around New Zealand
The Round New Zealand is a coastal anticlockwise circumnavigation in four legs with multiple stopovers. And what a beautiful, challenging coast it is, with lee shores and a dip down to 46º south.
Better than a dating app
The Latitude 38 Crew Party
There have been too many people met, relationships forged and sailing bonds made at the Latitude 38 Crew List parties over the years to mention.
Sponsored Post
Catamaran Cruising with Modern Sailing
Shootin' the Breeze
Humboldt Bay; Beached in Tib; Jokes of the Day
“Changing Conditions” in Humboldt Bay If you’re planning on sailing into Humboldt Bay in the next few days or weeks, the Coast Guard is urging extreme caution.
Sailing Movies
Small Boat at the Big Ocean Film Festival
One of the books that inspired us as kids was the story of Tinkerbelle, which chronicles the voyage of Robert Manry who sailed his 13.5-ft sloop from Falmouth, Massachusetts, to Falmouth, England, in 1965.
More 'Lectronics »
Report Listing