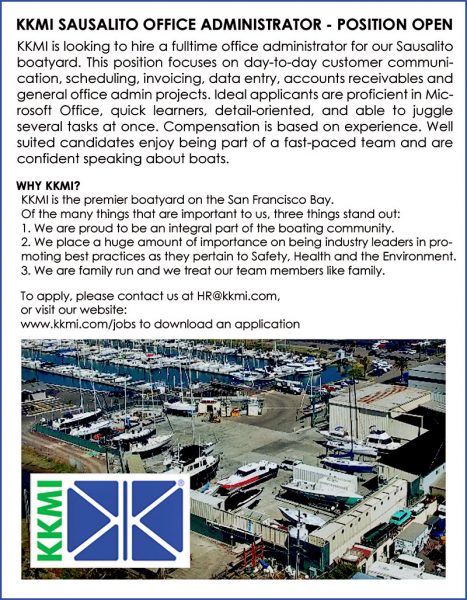 KKMI is looking to hire a full-time office administrator for our Sausalito boatyard.

SHARE ON Tweet Share Email Linkedln
Receive emails when 'Lectronic Latitude is updated. SUBSCRIBE
'Lectronic Latitude: Wednesday, Feb 26
Race Around 11 Islands
RORC Caribbean 600 Underway
A race that has surged to international prominence in just over a decade, RORC’s Caribbean 600 is now one of the most popular events on the Caribbean circuit.
A Few Spots Still Left on ‘Esprit’ for a Ride to the Spring Crew Party
After speaking with Mitchell Andrus of the Berkeley-based Kelly Peterson 46 Esprit yesterday, we were informed that there are a few spots left for a ride to next week’s Spring Crew Party at Golden Gate Yacht Club.
Preview of Sydney Event
SailGP Launches Season 2 This Week
For the past week, SailGP teams have been training in Sydney Harbour in anticipation of the first regatta of 2020 on February 28-29. Teams from Denmark, France, Great Britain, Japan, Spain and the USA take on champions Australia.
Jump the Puddle
Lessons Learned by 2019 Puddle Jump First-Timers, Part 2: Breakages
After doing the Pacific Puddle Jump last year, Elana Connor wanted to share what she — and other first-time jumpers — had learned in 2019 while sailing across the remote and dreamy South Pacific.
Sponsored Post
Workaholics Adrift by Judy McCandless
Workaholics Adrift is a travel memoir that follows a corporate workaholic who discovers her humanity via extended travel.
More 'Lectronics »
Report Listing