The festivities surrounding the 50th edition of the Transpac race have kicked into high gear with the arrival of the first four yachts in Honolulu. First, the MOD70s Argo and PowerPlay came streaking across the finish line at the Diamond Head buoy under the cloak of darkness on Wednesday night. After racing more than 2,200 miles across the Pacific, Jason Carroll and crew on Argo managed to hold off Peter Cunningham’s hard-charging PowerPlay team to claim line honors by just 29 minutes.

Some six hours and change later, Giovanni Soldini and team on the MOD70 Maserati sailed into Waikiki to begin a sunrise party that lasted much of the day. A much-anticipated rivalry, the three MOD70s delivered the goods with a four-and-a-half-day match race between the top two boats, with Maserati only a handful of hours back despite sustaining significant damage to the port ama and appendages on their trimaran.

Jason Carroll, one of the most prolific owner/drivers in the history of the sport, was ecstatic to be the first boat into Honolulu. “Every offshore yacht racer’s dream is to sail this race, and this is my first time ever in Hawaii… The full moon was with us pretty much every night guiding us safely here… It was four and a half days of anticipation to find out if we were going to beat out the competition. It came down to a pretty close race in the end, so this was a great celebration.”

Certainly one of the major keys to Argo’s victory was that they were able to negotiate a vicious Catalina Eddy that trapped much of the fleet in Long Beach on Saturday afternoon and evening. When navigator Anderson Reggio managed to thread the needle and get Argo out to the synoptic breeze before the competition, it proved to be the race’s decisive move. Argo jumped out to a 100-mile lead overnight. PowerPlay was in hot pursuit for more than 2,000 miles and ultimately came up just short of catching Argo. Once dockside at Waikiki Yacht Club, the two crews — including several veterans of Lloyd Thornburg’s Phaedo3 program — congratulated each other and celebrated well into the night.

Almost exactly 24 hours after Argo and PowerPlay finished, the world’s fastest monohull Comanche came rumbling across the finish line to claim the coveted Barn Door. That honor is now reserved for the fastest monohull in the race — a departure from past years when the rule was more prohibitive and required entries to have a fixed keel.

The 100-ft VPLP/Verdier super-maxi owned by Jim Cooney and Samantha Grant draws too much to get into the Ala Wai Harbor, and so had to go a few miles farther down and dock at Honolulu Harbor. Arriving to another warm Honolulu reception full of aloha, the mostly Australian and Kiwi team, including California native Stan Honey, celebrated a successful race while contemplating what may come next.

“Transpac was a fantastic experience for us,” commented skipper Jim Cooney. “This was our first major event in foreign waters since acquiring the boat. It was a huge commitment to ship the boat over and do the race, but it’s just been fantastic. My son James has become the architect for our plans. It was his idea for us to do the Transpac. We’ll sail the boat home and focus on another Sydney Hobart, but the Caribbean 600 may be in our future.”

The Irens 63 trimaran Paradox and the 100-ft super-maxi Rio100 are the next boats expected in to Honolulu, followed by a handful more on Saturday before the flood gates blow open, with the bulk of this record-setting fleet expected to finish between Sunday and Tuesday. Watch them come in on the tracker at http://yb.tl/transpac2019, and look for our feature in the August issue of Latitude 38.

Sailors from Stewball, Jackie-Oh, Toucan, Hat Trick and Stink Eye represented the Delta Doo Dah at Saturday’s Doo Dah Bach & Delta Artfest, hosted by Delta Bay Marina off the San Joaquin River on Isleton’s Delta Loop. (There may have been other Delta Doo Dah sailors that we didn’t recognize; if so, please let us know.) Temperatures stayed within the double digits. The Delta Breezes stayed mild with an occasional puff. In the shade on the lawn or on the dock floats, it was quite pleasant. At 4 p.m., Delta Rat Bill Wells, executive director of the Delta Chambers, presented a talk and slide show about the region’s maritime history.

Back at Owl Harbor on Sunday, we ran into Greg and Jillian from the Evenstar. The couple reported a beautiful sail up from Benicia that day. They brought their Ranger 23 up in two stages from Emeryville, with a stopover on Saturday night in Benicia, and plan to commuter-cruise out of Owl Harbor until mid- to late September.

You can still register for the Delta Doo Dah; it’s free, quick and easy online. Then create your own Do-It-Yourself itinerary or join in the remaining official events coming up in August. See www.deltadoodah.com. 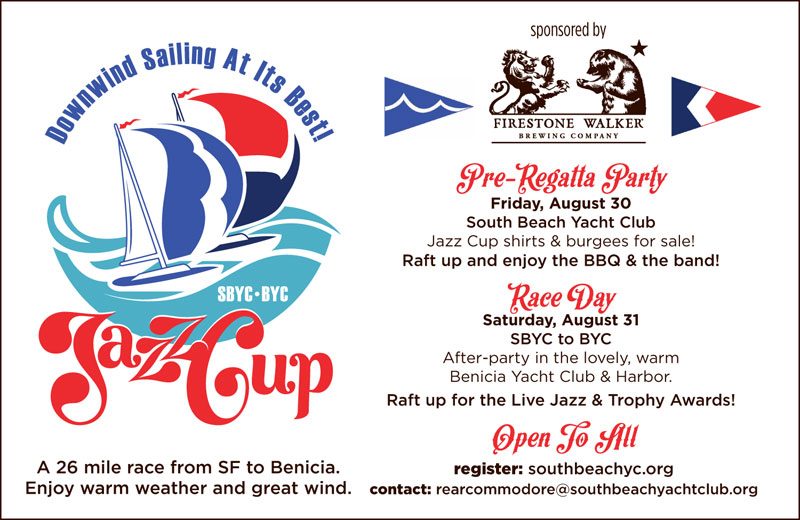 Latitude Nation — A few months ago, we received a query from Ben Shaw, the host of the Out The Gate Sailing podcast and East Coast transplant:

“I’m looking for advice from Latitude 38 readers — that learned, well-informed, enlightened, and competent community — about trucking boats. Specifically, I’m looking to truck a 15k-lb, 35-ft Hallberg-Rassy from Annapolis to San Francisco sometime next year. If you’ve done this before, what advice do you have? Who did you use and would you recommend them? What pitfalls should I be aware of? Yes, I know sailboats are meant to be sailed. And believe me, I’d much prefer to sail her around. But unfortunately, that’s not an option. So I welcome thoughts and advice.”

We’re taking Ben’s question as an opportunity to learn just how easy — or difficult — it is to move boats around the country. If you have any information, or further questions, please comment below, or write us here. And, if applicable, please be sure to include your Boat name, Make and Port of Call, or just tell us where you’re from.

What’s going on at the Stanford boathouse?

It’s a question that the New York Times recently asked in the wake of the college admissions scandal that led to the firing of Stanford’s 11-year head coach John Vandemoer. In April, Stanford’s men’s rowing coach, Craig Amerkhanian, “was mysteriously fired — late in the season, weeks before his planned retirement,” the Times said. Stanford also fired a strength and conditioning coach in April for reasons that are not clear.

The nationwide scandal was driven by college consultant William Singer, who “paid college coaches and athletic administrators to designate non-athletes as recruits for admissions purposes at elite universities.” The Times said that Stanford has been reviewing emails, phone records and computers of coaches and athletic department staff, and “has acknowledged that Singer contacted other coaches at Stanford — Amerkhanian among them. At least one parent indicted in the scandal, a Canadian businessman, also contacted Amerkhanian to discuss a recruiting spot for his son. Stanford maintains it has not unearthed any other cases of admissions fraud, however.”

The Times said that Vandemoer put the money taken from Singer into a fund that supported Stanford’s sailing program. The Times also said that Stanford’s sailing and rowing teams both struggled with the cost of competing against colleges in the Northeast. “In the 2018-19 school year, the sailing team made 15 trips east of the Mississippi River. According to Department of Education data on operating expenses, Stanford spent $182,000 on its sailing program in 2017 — more than any school other than Boston College, and nearly double what Yale and Georgetown spent. But Vandemoer said in an interview before his sentencing that his budget did not include equipment; his biggest fund-raising need was to replace a fleet of 18 sailboats — at a cost of about $120,000 — every five to eight years.”

SHARE ON Tweet Share Email
Leave a comment
Receive emails when 'Lectronic Latitude is updated. SUBSCRIBE
'Lectronic Latitude: Wednesday, Jul 17
Arrivals Back in SoCal
Transpac Sails in Both Directions
While many teams are arriving back to California with wounded boats, or in the case of one team, no boat at all, a trio of MOD70s at the front of the fleet is beginning to line up their approach.
America's Cup Hall of Fame
One of the Good Guys: Bill Trenkle
The America's Cup Hall of Fame recently announced the induction of William T. Trenkle of San Diego. The first class of inductees included Trenkle's longtime America's Cup skipper, Dennis Conner.
Savings plus BBQ
Svendsen’s Marine Anniversary Party
Save the date for huge savings: August 2-4.
Gender Diversity
Global Survey of Women in Sailing
The World Sailing Trust has launched a global survey on women in sailing, looking at trends within sailing and the wider industry around gender disparity.
Understanding the problem
The Plastic Plague, Part 2
What's the best solution to the plastic plague endemic to our modern lives? If we could wave a magic wand, should we pluck up every last piece of plastic from the ocean?
More 'Lectronics »