Just over a week after Randall Reeves completed his carousel circuit of the Southern Ocean and made his second rounding of Cape Horn, another Bay Area boat was on his heels. An Alameda-built sail drone (#1020) made the first autonomous rounding of the Horn.

The sail drone was “released from New Zealand two months ago, and is on track for a six-month circumnavigation of Antarctica,” Richard Jenkins, the CEO and co-founder of Saildrone, told Latitude in an email. The drone has been “bouncing off a few icebergs in ‘iceberg alley’ — Drakes passage — so it has been a bit tougher than expected, but still going strong.”

There were actually two sail drones launched from New Zealand in January. “Scientists from around the globe are providing inputs into the mission plan as the saildrones explore the Southern Ocean’s diverse ecosystem, studying topics ranging from krill abundance to penguin behavior and carbon fluxes,” the Saildrone website said. You can follow their Antarctic mission here.

Cheyenne Is Rolling Along on Her Mission

“I applied for a summer robotics internship at MIT my junior year of Boston University,” Sherry Smith, who is currently crewing on Cheyenne, wrote on her Facebook page. “My goal: to work on ocean AUV (Autonomous Underwater Vehicle) development.”

“I secured the runner-up position to my male colleague,” Smith continued. “Meanwhile, I took another internship in Silicon Valley (an earthquake-analysis company) all the while secretly hoping I’d get a call mid-mission saying candidate number 1 ‘broke a leg’ or some such. Well, fast forward: About as close as I can get to full circle. Crew on the AUV mothership Cheyenne!”

In keeping with this ‘Lectronic’s theme, we did a little, “science and sailing” Googling, and found some cool stuff, including a group called Sailing for Science I Sailors for the Sea, a group that works to reduce plastic pollution in the ocean. Of course, there’s our own nascent San Francisco Sailing Center, as well as many STEM programs throughout the Bay Area combining sailboats and science instruction.

And then, randomly, there was this video by KQED, explaining the science behind sailing.

Latitude Nation — As you may or may not know, the Pacific Sail & Power Boat Show is coming next week, April 4 to 7, at the Craneway Pavilion and Marina Bay Yacht Harbor in Richmond. Tickets are on sale now — don’t forget to use the promo code  LATITUPBS19.

You may or may not have been to Craneway Pavilion before. It’s a sweet spot, connected to Marina Bay Harbor by long paths along the water, as well as a free shuttle. In addition to boats, the Boat Show also has plenty of good food to eat, as well as friendly bartenders.

As you may or may not know, Latitude 38 will have a booth at the Boat Show. We will be selling and raffling off swag, as well as raffling off an original Jim DeWitt painting. We’ll be handing out magazines, including our favorite back issues. We’ll be kicking back a few cold ones at the party on Friday . . . and, just, in general. And, we’ll just be there to meet and chat with you, which is one of our favorite things to do. We hope you stop by and say hello.

As you may or may not know, the Boat Show is also full of seminars, which we’ll be telling you about all next week. But here’s one especially Latitude-centric lecture:

On Thursday, April 4 at 2:25 p.m., and again on Friday, April 5 at 10:30 a.m., Latitude editor and Doodette Christine Weaver will assist Cruising Notes author Pat McIntosh in leading a seminar titled How to Expand Your Sailing & Cruising Options. These seminars are free with your boat show admission. You’ll find them on the second floor of the Craneway Pavilion. 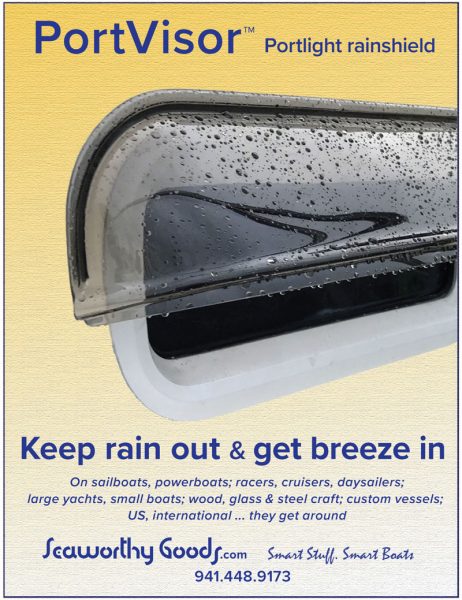 April Showers Us with Regattas

All of a sudden our race calendar has gotten quite full. A few highlights include:

Springing Out the Gate

The ocean racing season gets underway tomorrow in a big way with BAMA’s Doublehanded Farallones Race and continues on April 6 with Island YC’s Doublehanded Lightship; sign up by Monday the first to save $10 on the entry fee. Then, OYRA will sail out the Gate for the first time this year on April 27’s Lightship Race.

The following week, the action moves north to StFYC, host of World Sailing’s Nations Cup Grand Finale. The Nations Cup will bring 20 of the top-rated international match-racing skippers and their crews to compete in the Open and Women’s divisions in J/22s. This event was last raced in 2015 in Russia. Both the defending champions will be racing in 2019 — Russia’s Vladimir Lipavsky in the Open Division, and, in the Women’s Division, local sailor Nicole Breault, a member of the hosting club.

Many more worthy events crowd the schedule; check them out in our Calendar in the April issue of Latitude 38, coming out on Monday the first. Beer can season is getting underway too; we’ll have a preview in Monday’s ‘Lectronic.

SHARE ON Tweet Share Email Linkedln
2 Comments
Receive emails when 'Lectronic Latitude is updated. SUBSCRIBE
'Lectronic Latitude: Wednesday, Mar 27
Nacra 15 Qualifier
Cats Make a Splash at Spring Dinghy
"We were nervous going into the second day. When we saw the forecast, we were super-excited.” The forecast called for a 15- to 20-knot westerly — classic Bay racing conditions.
Let's Have a Discussion
Does the Boat Make a Difference?
About 10 years, ago we hosted a group of six folks for a charter aboard ‘ti Profligate in the Caribbean.
Waterfront Estate
Compass Real Estate: 27 Bellevue Ave.
Stunning Corinthian Island Waterfront Estate
US Sailing
Looking in on Sailing Symposiums
The pressure to climb the pyramid, at the expense of long-term participation and well-rounded skill development, has parents, instructors and program leaders looking to US Sailing for guidance and a different approach. They've seen too many kids drop out.
More 'Lectronics »
Report Listing